The first of four, it focuses on coastline across three areas in south-eastern part of island

The first of four studies looking at how specific parts of Singapore's coastline can be better protected against sea-level rise will start this week.

The study focusing on the south-eastern part of the island will cover 57.8km of coastline across three key areas: Changi, the stretch between the East Coast area and Marina Bay, and the Greater Southern Waterfront district, said national water agency PUB yesterday.

This City-East Coast stretch is one of four segments that PUB had identified for site-specific coastal protection studies.

Ms Hazel Khoo, director of PUB's coastal protection department, told The Straits Times that the four segments were each a "hydraulically distinct zone", where flood waters, up to a certain level, would not flow across the boundaries into other segments.

"This allows flood risks to be contained within individual segments, enabling Singapore to vary the approach, protection levels and implementation timelines across areas, as well as balance between fiscal prudence and the need to implement protection measures," she said.

The first study on the City-East Coast segment costs about $18 million and will be done by CPG Consultants. It is expected to take about four years to complete, PUB said in a statement. Areas that will be covered include a literature review to see how other nations are protecting their coastlines, data collection, the formulation of adaptation measures and pathways, as well as the development of solutions to mitigate flood risks.

Prime Minister Lee Hsien Loong had earlier cited possible strategies, including empoldering - a land reclamation technique - along Singapore's eastern coast, as well as the possibility of reclaiming a series of offshore islands there.

Asked if the study will look into these solutions, Ms Khoo pointed to how the study is the first extensive and in-depth one to develop measures along the City-East Coast segment. "Reclaiming land to levels higher than the sea is one of the possible coastal protection options, and is a form of barrier to keep seawater out," she said.

Singapore's City-East Coast stretch is particularly vulnerable to the rising tides caused by climate change. The area is where critical infrastructure like Changi Airport and community nodes, including East Coast Park, are located.

Ms Khoo said the challenge in developing coastal protection measures is to find solutions that are flexible and adaptive to climate change uncertainties. Yet they must also be able to protect Singapore in a way that would make the coastlines still liveable. 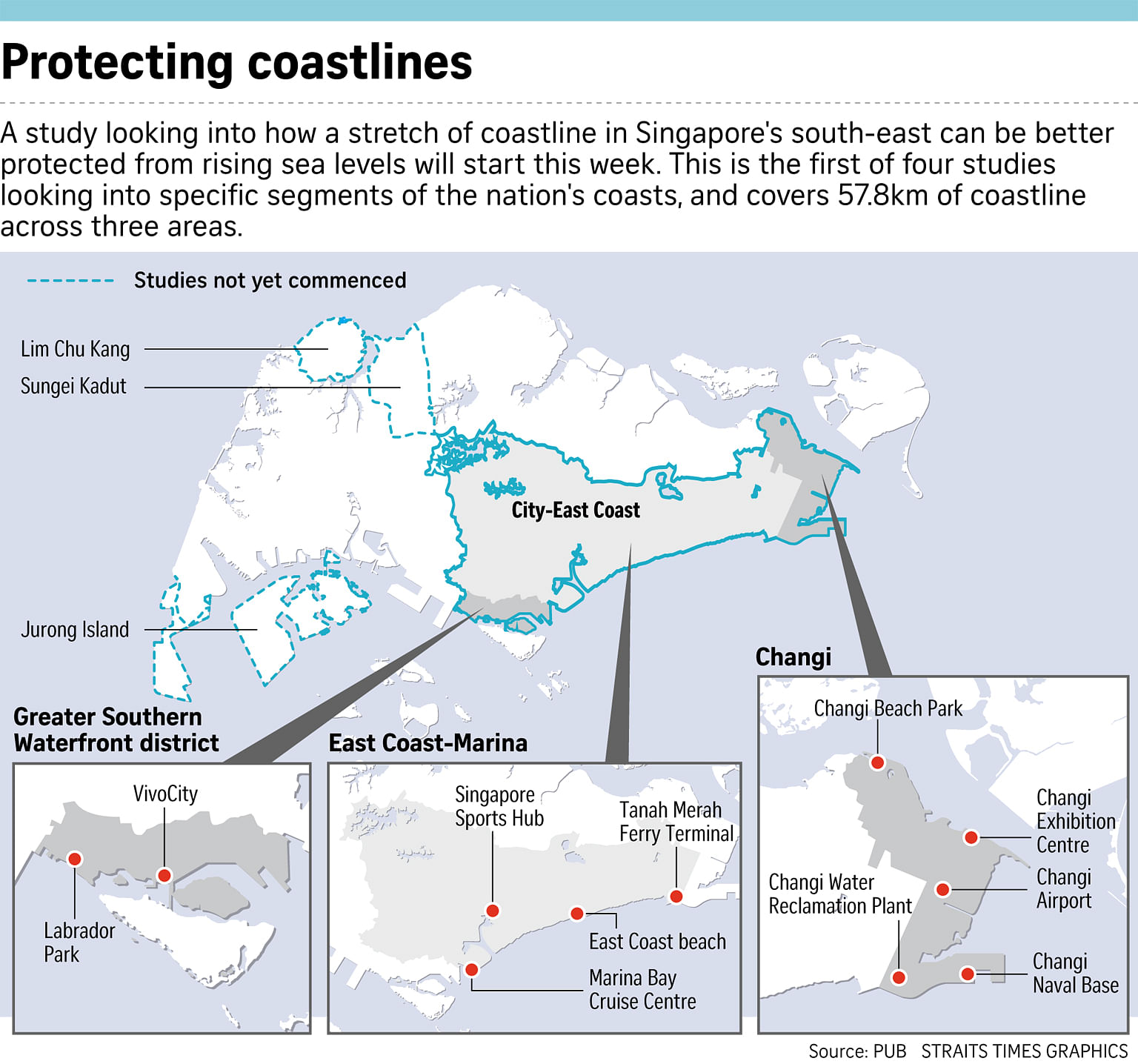 "This is an opportunity for us to explore a combination of both engineering and nature-based solutions with innovative designs to better integrate with local development and land-use plans," she said.

"This will allow us to potentially enhance the living environment and create new recreational spaces with multi-functional uses for the community, like what was done at Marina Reservoir."

Marina Reservoir, enclosed by the Marina Barrage, hosts activities such as boating, kayaking and dragon boating.

Projections for sea-level changes in the tropics are not as well known as those for other areas. Studies are ongoing in Singapore to change this.

Researchers from Nanyang Technological University, for instance, are studying past sea-level rise recorded in natural archives such as mangrove sediment cores and coral microatolls to better calibrate global models to the local context.

The panel is chaired by National University of Singapore professor Chan Eng Soon, who is also chief executive of the Technology Centre for Offshore and Marine, Singapore.

Professor Chan said the panel's aim is to function as an independent advisory body to PUB's coastal protection efforts.

"I am glad to have the opportunity to work with a team of eminent colleagues in this field - especially in guiding PUB as it embarks on the monumental task of protecting Singapore from flooding due to intense rainfall and rising sea levels," he said.

A version of this article appeared in the print edition of The Straits Times on May 19, 2021, with the headline 'Study to look at protecting S'pore against sea-level rise'. Subscribe
Topics:
More
Whatsapp Linkedin FB Messenger Telegram Reddit WeChat Pinterest Print Purchase Article Copy permalink