From nursing young plants that would line the roads and fill the parks, to propagating and conserving rare native species, and sourcing for plants from around the region, the NParks Pasir Panjang nursery has, since the 1970s, played a pivotal role in the greening of Singapore. The Straits Times takes a peek at what goes on behind the scenes at the 12ha nursery which, in conjunction with the Community Garden Festival, is open for tours on Nov 4 and 5.

Nestled in a gentle valley between Pasir Panjang and Canterbury roads, close to the back gate of the HortPark, more than 3,000 species of largely native plants grow.

From pretty flowering plants that attract pollinators to various species of padi, edibles like the golden papaya and rare native plants like the lowland foxglove tree, the 12ha nursery is an Eden of growing plants, cared for by experts.

In the nursery's propagation house, plants are babied under optimum conditions to ensure their survival. First, seeds and cuttings are prepared, then seedlings and saplings are sent to a misting room for hourly watering. When appropriate, young plants are moved to a hardening area for them to acclimatise to the natural environment.

When they have grown enough, a majority will be sent to various parks, nature reserves and roads. Some are seen at events, such as the upcoming Community Garden Festival. Some, like the paddies, remain in the nursery, to educate visitors. Others are stock plants, providing seeds and stems for the future.

Besides contributing to the greening of Singapore, the nursery also plays an important role in the conservation of native plants. Every week, seeds and saplings of native plants are collected from forests and parkland islandwide and cultivated in the nursery until they are can be reintroduced. 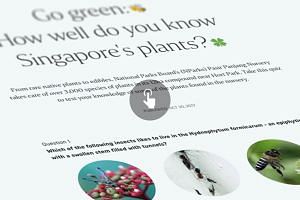 Go green: How well do you know Singapore's plants?

A couple of critically endangered native plants the nursery helped to conserve were the twin-apple tree (Ochrosia oppositifolia) and the Hopea sangal.

Two saplings from a twin-apple tree kept in the nursery for more than 10 years were planted on Coney Island in June, after the tree was found to be locally extinct.

As for the Hopea sangal, cuttings were made from a rare tree discovered in Changi in 2002, before it was cut down by a property developer. A sapling has grown into a young plant at the HortPark.

The nursery also sources plants from countries in the region, such as Malaysia, Thailand and Indonesia, to increase the variety used in the National Parks Board's (NParks) planting programmes.

For details of the tours, visit www.nparks.gov.sg/gardening/community-garden-festival/guided-tours

A version of this article appeared in the print edition of The Straits Times on October 30, 2017, with the headline 'Sowing the seeds of a garden city'. Subscribe
Topics:
More
Whatsapp Linkedin FB Messenger Telegram Reddit WeChat Pinterest Print Purchase Article Copy permalink