There is nowhere to run if Singapore is hit by a severe rise in sea levels, and this is among the most pressing issues facing the Republic, say climate scientists.

So, researchers across the island are banding together to figure out exactly how the country will be affected - based on sound science - to work out the best solutions.

"This is the future of the nation we are talking about," said Professor Benjamin Horton, chair of the Asian School of the Environment at Nanyang Technological University, pointing out that rising sea levels have widespread implications, ranging from flooding to salination of water resources.

He is among the experts who could be part of a $10 million National Sea Level Research Programme that will be launched to boost the understanding of sea levels around Singapore and develop more robust projections of rising sea levels.

To do so, scientists will have to delve into a complex, multi-disciplinary and rapidly evolving field involving many areas of expertise. These would range from storm surges and ice-sheet dynamics, to circulation and thermal expansion of the ocean and vertical land movements, for instance.

Once the projections are done, decisions can be made on what measures to take, ranging from raising low-lying areas to building tidal barrages to prevent flooding, to even floating parts of the city.

Minister for the Environment and Water Resources Masagos Zulkifli, who announced the programme yesterday, said: "Climate science, where it is developed specifically for the tropics, is a new and complex area of research.

"Much more work needs to be done. I am glad we are taking the initiative to lead."

He also announced that a new Climate Science Research Programme Office will be set up next year under the Centre for Climate Research Singapore (CCRS), which was established in 2013 and is now one of the region's most advanced tropical climate research centres. 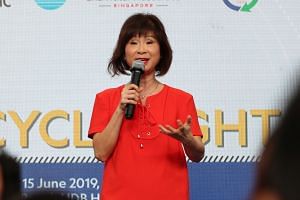 Citizens’ workgroup to be formed to help improve recycling culture

After hottest June ever, earth on track for warmest July

The office will focus on five key areas: sea level rise, the impact of climate change on water resources and flood management, the impact of warming trends on human health and the energy sector, biodiversity and food security, and cross-cutting research.

It will work closely with local research institutes and institutes of higher learning and drive efforts to formulate and implement the National Climate Science Research Masterplan to strengthen expertise here.

Professor Erland Kallen, director of CCRS, said the office would expand current efforts and engage the research community at a national level. His centre, which has 35 scientists, is also expanding.

The urgency of the environmental challenges cannot be overstated, said Mr Masagos, speaking at the Partners for the Environment Forum at Marina Bay Sands.

Based on today's science, climate scientists here have projected that mean sea levels could rise by up to around 1m by 2100, he said. This could happen even earlier or sea levels could go even higher if ice sheets melted more rapidly and ice shelves in Antarctica collapsed.

Even worse, if a tropical storm happens at sea, sending surge waters to Singapore that it cannot keep out, while in tandem a heavy rainstorm occurs inland, bringing with it rainwater that cannot be drained away, these could be the ingredients of a perfect storm, said Mr Masagos.

"While this is an extremely rare scenario based on today's science, it could possibly not be inconceivable in the future."

He added: "We must remain clear-eyed about Singapore's vulnerability as a small, low-lying island with no natural resources and no hinterland to retreat to if sea levels rise.

"At stake is nothing less than the physical preservation of our island nation and its inhabitants."