For the last 20 years, Mr Alan Toh has been diligently tending to his vegetable farm in Lim Chu Kang because he believes Singaporeans deserve fresh and quality local produce.

But Mr Toh's Yili Vegetation will not be taking part when 12 new plots of farmland meant for leafy vegetable cultivation come up for bidding in August.

Although his present lease ends in 2019, the 53-year-old said he cannot adopt high-tech farming methods, such as hydroponics or vertical farming. Mr Toh, whose farm is soil-based, said: "I don't have confidence in ensuring the same quality with high-tech farming after using soil for so long. The new plots are all reclaimed land too, which is not good for growing vegetables." His possible departure from farming represents one side of the impending change in Singapore's agriculture scene. Other farm operators, who embrace technology, argue that it also means the possible entry of high-productivity farms.

Take, for instance, the experience of Apollo Aquaculture.

Chief executive officer Eric Ng, 44, has adopted automation in his group's marine farming process, using sensors and computers to control water conditions. Six of his fish ponds are housed in a three-storey building and are stacked vertically on top of one another. Said Mr Ng: "If the industry remains set in its old ways and nothing is done, it will be very hard to find younger people to take over the business. No one wants to go into farming if it remains tedious." 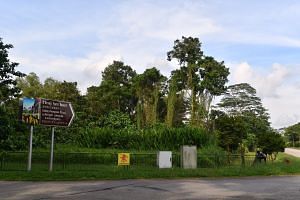 Land to be released for new farms to raise food supply 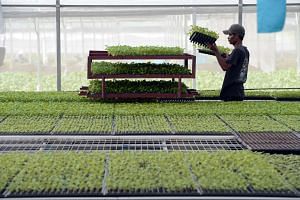 7 land parcels for vegetable, quail-egg farming up for tender: 6 types of produce you can buy from farms here

He said technology allows companies the opportunity to chart a different path. If he wins the tender and moves into the new farmland, he will co-opt technology and move into farming fish for human consumption.

"If farmers do not embrace technology now, in the future, a foreign company can simply come in with these cost-saving technologies and make us obsolete," he said.

With automation, he said, he can save up to 30 per cent in manpower costs - a number he predicts can be achieved based on a recent testbed at his farm.

Farmers can tap the Agri-Food and Veterinary Authority's (AVA's) Agriculture Productivity Fund, which has set aside $63 million for them to invest in innovation and pay for high-tech, automated equipment. Mr Khoo said that as 30 per cent of funds is disbursed upfront when projects are approved, this would help most farmers cope with the initial costs.

AVA said that since the launch of the fund in 2014, there have been around 100 applications and about $7 million has been committed to farmers.

Those who have smaller capital but want to continue farming can submit a joint bid with other farmers, including foreign firms, or look for investors who are confident in their product, said Mr Ng. And that holds out some hope for people like Mr Toh.

Mr Ng added: "I hope these older farmers get to continue farming. In a skills-based trade like farming or aquaculture, experience is very important and it will be a shame to lose them."

A version of this article appeared in the print edition of The Straits Times on May 12, 2017, with the headline 'Release of land paves way for high-tech farming'. Subscribe
Topics:
More
Whatsapp Linkedin FB Messenger Telegram Reddit WeChat Pinterest Print Purchase Article Copy permalink