SINGAPORE - The onus will soon be on producers of mobile phones, refrigerators and other such goods to make sure they are properly recycled or disposed of, as the government puts in place laws to fix Singapore’s poor e-waste recycling rates.

For consumers, this could mean more collection points for small e-waste, and take-back services to make it easier to get rid of their larger unwanted electrical and electronic goods.

Incentives or taxes will be used to prod manufacturers and importers to meet specific targets, said Environment and Water Resources Minister Masagos Zulkifli on Thursday (Feb 1).

“We have to look at how we incentivise and how we put in a levy or some form of fines when producers do not meet their targets”, he said, speaking on the sidelines of a pre-Budget consultation session on e-waste with industry players, non-government groups and academics.

But these will be put in place at a later stage. The targets will also start small and increase over time. “A transition time is needed,” Mr Masagos noted.

He assured that the informal sector – such as scrap dealers and rag-and-bone men – will be made part of the system. They could be trained to recycle e-waste properly or involved in the collection process.

The Republic is taking the cue from countries such as Sweden by taking on the Extended Producer Responsibility (EPR) approach. In Sweden, around half of all e-waste gets a second life as ingredients in new products and materials.

The move is timely, with the exponential growth of e-waste worldwide. In Singapore alone, 60,000 tonnes is produced each year, half of which comes from households. Yet only 6 per cent of household e-waste is sent for recycling, according to a recent survey.

There are about 400 e-waste collection points set up by telco StarHub, located in places like schools, shopping malls and community clubs. However many consumers do not know they exist or do not find them convenient.

There is no national collection system for larger household appliances.

The country’s abysmal e-waste recycling rate means that precious metals in discarded products end up being incinerated, while harmful substances such as coolants from refrigerators are released into the atmosphere during the same process. 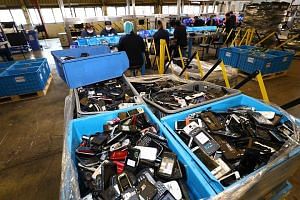 But while legislation will provide a more structured system for e-waste to be collected and recycled, there is a need to improve the physical collection infrastructure and a change in behaviour among consumers, said participants at the pre-Budget consultation session.

“Recycling and collection points for e-waste needs to be both accessible and visible for consumers and residents,” said Mr Ashley Tan, 32, from Deloitte consulting.

He was among 37 participants from more than 20 different organisations, which was also attended by Mr Masagos.

She said more people can also do their part by living more sustainably by trying to repair their electronics instead of just buying a new one when they spoil.

As for the upcoming regulations, manufacturers and importers should pay a small fee that will go into a recycling fund like in other countries, said Mr Juergen Militz, secretary of the Waste Management and Recycling Association of Singapore.

Recycling companies can profit from recycling laptops and mobile phones as they can extract and then sell precious metals in them, but refrigerators on the other hand command a negative value as it costly to dispose of the chemicals in refrigerants for instance.

“If done properly, a balance can be achieved,” he said.

Ms Janet Neo, head of corporate sustainability of Fuji Xerox Asia Pacific, said legislation will challenge manufacturers to rethink their business model, including designing products that are easier to recycle.

But she noted that it be costly for smaller players and that Government could help such companies through co-funding schemes or incentives.