Some bird photographers in Singapore are making a name for themselves, but not for their pictures.

Instead, they were recently pointed out on social media for practices that harm animals and their habitats, highlighting the thorny ethical issues of nature photography.

The Nature Photographic Society (Singapore) is now taking steps to minimise harmful photography practices. It is working with hobby group Birds, Insects N Creatures of Asia (Bica) to hold activities, such as photography workshops, and talks on topics such as appreciating nature subjects, to reach out to the growing number of nature photographers here, said society president Fong Chee Wai. 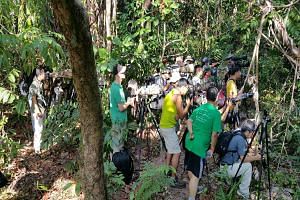 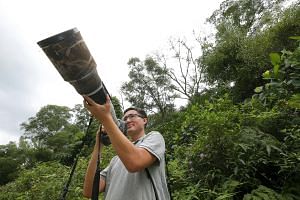 The first workshop will bring together members of the nature and scientific communities, photographers and bird watchers, and is being planned for January next year.

Dr Fong said only "a handful" carry out unethical photography practices. "Some of them are new and could have picked up the wrong tips, which is why workshops and talks can help by providing an alternative perspective," he added.

Last month, a post on website Mothership.sg alleged that three photographers had baited grey-headed fish eagles in Bukit Batok using live fish which were injected with air and styrofoam so that they would remain afloat. They allegedly did this to try to get a shot of an eagle swooping down on its prey near the water surface.

It followed another incident in August last year, when a photographer was caught tethering a little tern chick's legs to a bush so it could be posed for a photograph.

Both incidents drew the ire of the nature community and prompted the authorities to take action.

The National Parks Board (NParks) is investigating the Bukit Batok case and the photographer in the little tern incident was fined $500 by the Agri-Food and Veterinary Authority for animal cruelty.

If the photographers in the Bukit Batok case are found guilty, both incidents would be clear examples of unethical photography.

But other practices, such as the use of bait or recorded calls to lure birds closer, or clearing vegetation for cleaner shots, are in more of a grey area. National University of Singapore bird researcher David Tan said a common defence from photographers is that these practices do not cause direct harm to the birds.

"But they are in no position to ascertain this, as these are issues that generally require some level of understanding of the species' biology," Mr Tan said. "Baiting causes birds to divert foraging time away from more nutritious food in the wild to unhealthy store-bought bait like mealworms."

He has observed such practices while doing fieldwork since 2012, and has come across people who played recorded calls or went off the boardwalk to photograph birds. Venturing off the boardwalk may cause habitats to be trampled upon.

A spokesman for bird conservation group BirdLife International said the use of playback is generally not recommended, especially during the breeding season when it can divert a bird's energy.

NParks director of conservation Wong Tuan Wah urged the public to avoid manipulating any plant or animal in the process of photography. "This includes not feeding or using artificial lures and calls to attract the animals as this might harm or cause discomfort to them."

In August, the group formalised an agreement with Bica, which allows it to use the latter's photos and videos on its website. The study group provides scientific background and interpretations, "adding value to Bica's images of birds and their activities", Dr Wee said.

Bica. "As newcomers get more involved in nature activities, experiencing the care taken by more experienced photographers will hopefully inspire them to also care for the plants and animals around them."