The National Environment Agency (NEA) is calling for tenders for the installation and maintenance of an automated food-waste conveyance system at Our Tampines Hub (OTH) hawker centre.

The pilot project is part of current food-wastage reduction and recycling efforts at the hawker centre, NEA said yesterday, adding that it will also demonstrate how automation can be incorporated into the food-waste collection system to improve productivity.

The tender is expected to be awarded by the second quarter of this year, with the system to be operationally ready by the end of the year.

The successful bidder will be required to install the system in phases, maintain it, monitor its utilisation, and train stallholders and table cleaners to use it.

The NEA told The Straits Times it will bear the cost of the installation and maintenance of the system which will not be passed down to the managing agent or stallholders.

"It is estimated that stallholders will need to pay about $1.50 more a month in electricity costs for the running of the system. NEA will monitor any potential increases to the cost to stallholders as part of the trial," said an NEA spokesman.

The OTH hawker centre is one of the seven currently managed by private social enterprises and cooperatives.

The arrangement drew flak last year, with concerns over how much these hawkers were charged for services such as tray returns and dish cleaning. 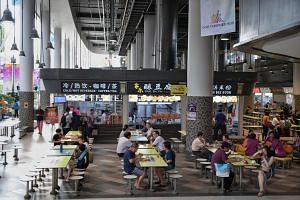 The NEA had said it would review the current model to improve conditions for hawkers.

The new conveyance system at OTH will eliminate the need for the manual transfer of food waste.

Currently, food waste is segregated into covered bins provided to each stall, and these are then transferred to large waste bins at tray-return stations by stallholders.

The large bins are also used by the cleaners who clear leftover food on tables.

When the large bins are full, cleaners wheel them to the food-waste recycling room located in the basement of OTH, where the waste is converted into non-potable water, a liquid nutrient, and organic fertiliser.

When the conveyance system is in place, food waste will be ground and conveyed from each of the 42 stalls and two tray-return stations at the hawker centre directly to the food-waste treatment system in a closed system.

The greater convenience is expected to boost the food-waste recycling rate at the OTH hawker centre, with the closed system reducing smells that may arise from the collection and transportation of such waste.

The NEA also noted that the project is in line with Singapore's vision of a Zero Waste Nation, and its aim of an overall recycling rate of 70 per cent by 2030.