SINGAPORE- Water levels in the Linggiu reservoir in Johor - which supplies half of Singapore's water needs - have fallen to a new historic low of 36.9 per cent.

This is even below the lowest water level recorded of 41 per cent last October.

Dry weather has caused the water levels to fall from 80 per cent at the start of 2015 to current levels, said Minister for the Environment and Water Resources Masagos Zulkifli on Tuesday (April 12) about the reservoir in Malaysia.

"This has impacted the reliability of imported water that supplies half our current needs," he added during the debate on his ministry's budget.

"Fortunately, because we have diversified our water resources, we have been able to mitigate the impact of drier weather. But we cannot be complacent." 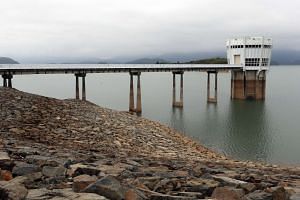 Water levels in Johor's Linggiu Reservoir at 42%, just above historic low of 41%: Masagos 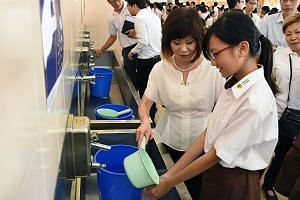 Use water sparingly, Linggiu Reservoir still less than half full

He pledged that the Government will continue to "plan and invest ahead of demand" in the face of climate change. 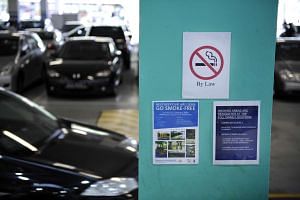 Smoking ban in reservoirs, parks in public and private estates

The Linggiu reservoir, built upstream of the Johor River in 1994, collects and releases rainwater and pushes seawater back into the sea, to ensure that the river water is not too salty to be treated by the Singapore-run water treatment plant there.

Singapore can tap 250 million gallons of water a day from the river, which can meet up to 60 per cent of the country's needs.

Currently, Singapore needs 430 million gallons of water per day, but this is expected to more than double by 2060.

Prime Minister Lee Hsien Loong, in a Facebook post on Tuesday evening, wrote: "Water has always been and will always be a strategic issue for Singapore, which is why I watch the water levels very closely.

"We must continue to conserve and make the most of this precious resource. You can do your part by not wasting water, recycling what you can, and always using it wisely."