SINGAPORE - A national recycling effort collected just 2 per cent of the total amount of waste generated by the domestic sector here in 2016, falling far behind other waste collection efforts.

The figure was derived from calculations done by The Straits Times, after Senior Minister of State for the Environment and Water Resources Amy Khor on Wednesday (Feb 28) revealed figures for the National Recycling Programme in Parliament- the first time such data was revealed publicly.

She was responding to a question by Mr Louis Ng (Nee Soon GRC), who had asked for the cost and tonnage of recyclables collected under the National Recycling Programme.

Dr Khor said the public waste collectors collected about 44,200 tonnes of recyclables in 2016, but did not say how much the programme has cost the Government.

The 44,200 tonnes collected by public waste collectors work out to about 2 per cent of the 2.1 million tonnes of waste generated by the domestic sector in 2016. 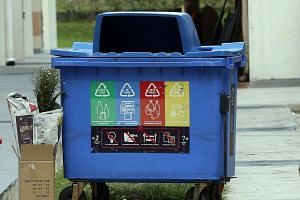 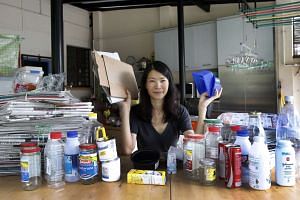 Recyclables from the domestic sector, which includes public and private estates, schools, army camps, petrol kiosks, places of worship and shophouses, are picked up by public waste collectors under the National Recycling Programme, or collected by the informal recycling sector.

On Wednesday, Dr Khor told the House that the Ministry for the Environment and Water Resources (Mewr) is looking at how it can improve recycling rates in the domestic sector.

"In recent years, we have been enhancing recycling infrastructure to make it even easier for Singaporeans to recycle," she said.

For example, from April 1 this year, all new non-landed private residential developments will need to provide dual chutes for refuse and recyclables.

All existing condominiums will also have to provide one recycling bin per block from Aug 1 this year.

"We will also use regulatory measures to complement the new recycling infrastructure. For example, we will introduce a new framework to make it easier for Singaporeans to recycle their e-waste," Dr Khor added.

The new measures follow other strategies that NEA has already taken in hopes of boosting Singapore's lacklustre domestic recycling sector.

For example, since 2014, every HDB block has been provided with a blue recycling bin - up from one bin for every five blocks. That year, the Government also announced that all new public housing projects will be fitted with recycling chutes with throw points on each floor.

Still, overall domestic recycling rate - which includes recyclables collected under the National Recycling Programme and the informal recycling sector - has hovered around 20 per cent since 2012.

In comparison, Taiwan has a household recycling rate of 55 per cent. Germany's recycling rate for municipal waste is 64 per cent and that of South Korea is 59 per cent, according to statistics from the Organisation for Economic Cooperation and Development.