SINGAPORE - YouTube user Fast Snail posted a video on Thursday (Oct 22) which showed the otter family featured in the viral video on Tuesday.

The otter pup, which was heard squeaking in distress in the first video because it was baited by an illegal angler's hook, seems to have got free of the fishing line and is no longer limping. But Fast Snail wrote in the video caption that it is not clear if the hook is still under the animal's fur.

The PUB is working to identify the man seen fishing illegally in Toa Payoh whose fishing hook hurt the wild otter.

A video posted on YouTube by user Fast Snail on Tuesday (Oct 20) showed a group of men fishing in a stretch of the Kallang River at Lorong 8 Toa Payoh. In the video, a wild otter - part of a group of five - is seen hooked on a fishing line and making cries of distress, before breaking free. The video has been viewed more than 20,500 times.

"PUB is investigating the incident and is working to identify the angler in the video. We welcome any information from the public that can help us to do this," a PUB spokesman said on Thursday evening. "PUB is dismayed at the incident."

Fishing is not allowed in waterways, including the stretch seen in the video, the spokesman for the water agency added. Those caught fishing at no-fishing areas may be fined up to $3,000.

Wildlife rescue group Animal Concerns Research and Education Society (Acres) said in a Facebook post on Thursday night that they have verified that the fishing line is no longer on the otter.

"We thank members of the public (including the person who filmed the footage) for reporting this to Acres. We are in touch with AVA and PUB," it said.

Acres is also asking for help in identifying a man whose photo it shared in the Facebook post.

Members of the public can report sightings of illegal fishing to the PUB hotline at 1800-284-6600. Photos and videos of the incidents are also welcome, the PUB said.

A list of designated fishing sites can be seen here. 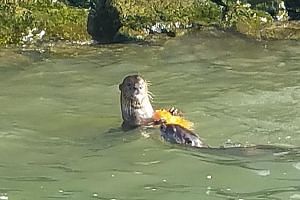 Otter family spotted having a fun time at Marina Bay

Otters have become a common sight in Singapore's waterways, with a family of them spotted at Marina Bay in August. The creatures have also been seen at Punggol Waterfront and East Coast Park.

Most recently, a family of five - possibly an otter pair usually seen at Bishan-Ang Mo Kio Park, and their offspring - were seen taking a stroll around the St Andrew's Junior College campus in Potong Pasir.