SINGAPORE - The number of new dengue cases last week rose slightly to halt a two-week slide, according to the latest figures on the National Environment Agency's (NEA) dengue website.

There were 176 reported cases of the mosquito-borne virus - two more than the previous week. This was the third lowest weekly figure, with the lowest of 161 recorded in June.

A total of 11,924 dengue cases have been reported since the start of the year.

With Singapore still in the traditional peak dengue season, the NEA said it is still anticipating an upward trend in the number of cases. 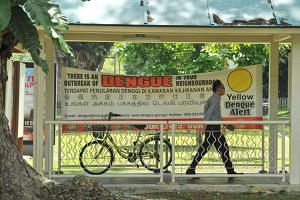 Meanwhile, the number of dengue clusters across the island continues to decrease. As of Monday (Sept 26), there were 35 compared to the 40 reported last week. Seven are classified as high risk.

A cluster at Yishun Avenue 4 and Yishun Street 61 is now the highest risk with a total of 56 cases, including seven in the past fortnight.