NParks' staff, academics and interest groups to work together to ensure their survival

The gentle sea turtle has long fuelled the imagination, and Singaporeans flock to turtle sanctuaries elsewhere to catch sight of them.

But sea turtles also live and nest right here, unknown to many. Unfortunately, the two species of sea turtles most commonly found here - the hawksbill turtle and the green turtle - are considered critically endangered.

While there has been no formal population count, more is being done to study the elusive creatures.

The Straits Times has learnt that a Marine Turtle Working Group - comprising staff from the National Parks Board (NParks), academics from institutions such as the National University of Singapore, and interest groups and individuals - is being formalised.

Such collaborative work has been ongoing since 2006, but the formalisation of the working group will better tap the expertise of the group to look into a wider range of issues, such as the development of turtle hatchery procedures.

Earlier this year, HSBC Singapore donated $500,000 to build the country's first sea turtle hatchery, to be set up at the southern lagoon on Small Sisters' Island by the end of next year. It will form an integral part of Singapore's first marine park. 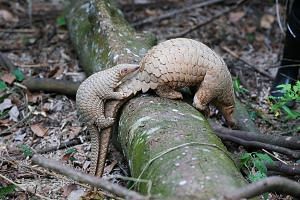 Experts in the working group will also continue to monitor beaches for egg-laying turtles and conduct research on turtle movements in waters here. There have been 10 reported turtle sightings at East Coast Park and Changi Beach since 2012.

It is possible that there have been more visits that were not observed or reported, said Dr Lena Chan, group director of NParks' National Biodiversity Centre.

"Hence, NParks felt it was timely to expand the current turtle management procedure, which focuses on reporting of incidents, to include a wider range of activities... in partnership with various academic and interest groups who have indicated interest in marine turtle issues."

Mr Stephen Beng, chairman of the marine conservation group of the Nature Society (Singapore) and a member of the working group, said sea turtles depend on many habitats - they nest on sandy beaches, forage for food in mangroves and seagrasses, and find shelter in coral reefs. All of these habitats can be found in Singapore.

He added: "As integral parts of the marine ecosystem, sea turtles are also useful indicators of the vitality of our overall marine environment.

"Singapore is also unique as our shores are more urbanised compared with our neighbours', and the working group will work on recommendations to balance maintaining shoreline integrity and biodiversity survival."