There could be more urban farms, rooftop gardens and solar panels sprouting up across Singapore, as city planners redouble efforts to make the city more green.

There are some 100ha of high-rise greenery - which refers to plants covering building exteriors - islandwide. This is equivalent to more than 100 football fields.

The target is to double this by 2030, set as part of the Sustainable Singapore Blueprint two years ago.

To get there, developers will be given more options to replace greenery lost at a site during the development process, announced the Urban Redevelopment Authority (URA) yesterday.

Now, they can do so only through landscaping options within the building or by creating sky terraces and gardens on rooftops. Going forward, new features such as urban farms and communal gardens on rooftops will contribute towards the landscape replacement requirements.

Said Second Minister for National Development Desmond Lee: "Such features have been gaining popularity in our urban landscape as many Singaporeans have a keen interest in farming and gardening."

Speaking at the opening ceremony of GreenUrbanScape Asia, a three-day conference on landscape and design, he said the Government had set the 200ha target to make the urban landscape more attractive and support richer urban biodiversity. He added that "an appreciation and love for greenery is now core to Singapore's national identity".

The enhancements aim to encourage landscaping on walls and roofs that not only beautifies buildings, but also provides visual relief to passers-by and cools the ambient temperature, said a URA statement. The changes come under the Landscaping for Urban Spaces and High-Rises (Lush) programme, which was launched in 2009 to incentivise developers and building owners to integrate greenery.

Yesterday, Mr Lee, who is also Minister for Social and Family Development, cited a joint study by the National Parks Board (NParks) and the National University of Singapore, to illustrate how high-rise greenery has a part to play in housing wildlife. 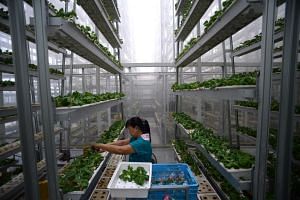 The study looked at biodiversity in roof gardens here from May 2014 to December 2015, and recorded some 53 bird species and 57 butterfly species in over 30 study sites.

According to the study, which is the first of its kind in Asia, roof gardens that attract the most wildlife are located below 50m in a building; have a larger planted area of more than 1,100 sq m; and have flower-and fruit-bearing plants .

As greener methods of using rooftop areas will require developers to relocate mechanical and electrical equipment, URA will sweeten the move by granting gross floor area exemptions for the space where the relocated equipment is placed in. These exemptions could represent significant cost savings for developers and building owners.

To standardise the assessment of these green plans for buildings, URA will also roll out a new Green Plot Ratio (GPR) framework as a requirement for developers, where denser greenery is required of buildings that see more intense use.

GPR, which will consider vertical greenery coverage, is an improvement over the current standard which takes only horizontal planted areas into consideration.

Today, there are 550 developments in the Lush scheme. Two out of three new residential developments so far have applied for at least one Lush incentive, while over half of new malls, offices and hotels have done the same, said URA.

The enhancements will encourage more developers to get on board, said GuocoLand Singapore group managing director Cheng Hsing Yao, 46. "I just hope we can strike a balance between the visual and the usability aspects of our greenery."