Apart from wood, paper makers, SEC plans to work with others such as palm oil industry

Even as more firms signed a declaration that their products are free of raw materials from companies being investigated for forest fires in Indonesia, many noted that it was hard to pinpoint an item's source.

Tissue paper distributor Tipex and printer paper supplier Mukim Fine Papers signed on Tuesday. FairPrice, Unity Pharmacy and Malaysia Newsprint Industries did so yesterday, bringing to 15 the number of firms that have signed.

Tipex said in a statement to The Straits Times that it does not own plantations and mills, and so does not make paper products itself.

"Rather, these are sourced from various suppliers, internationally," said its spokesman Cindy Lim. "Due to the involvement of many parties in the process, companies may not be privy to one another's internal business and work processes."

Mukim Fine Papers simply stopped ordering from Asia Pulp and Paper (APP) - one of the five firms under probe - altogether. We cannot trace what is happening at APP so it's best that we just stop selling its products.

MR BEN CHUA, business development manager at Mukim Fine Papers, on not ordering from Asia Pulp and Paper (APP), one of the five firms under probe 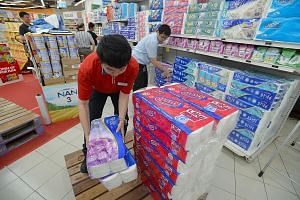 Said its business development manager Ben Chua: "We cannot trace what is happening at APP so it's best that we just stop selling its products."

On Monday, the Singapore Environment Council (SEC) released a list of firms that had signed the declaration. It has so far sent the form to 23 firms that manufacture or sell wood and paper products.

SEC's plan is to also start working with other industries known to contribute to the haze and deforestation - for instance, palm oil product manufacturers and retailers.

Culprits are difficult to trace as supply chain processes are muddied by factors such as a lack of land ownership information in Indonesia.

Traders, he said, go round to small independently-owned oil palm farms, collect the fruit, then supply it to a main supplier, which trucks it to mills.

This, said Associate Professor Tan Yan Weng, head of SIM University's logistics and supply chain management programme, causes "everything to get mixed up".

There are other complications, said SEC's head of eco-certification Kavickumar Muruganathan. Retailers here typically obtain the rights to sell a product from distributors, which then arrange with overseas manufacturers to import the stock.

"Manufacturers might own plantations, but some strike deals with landowners on the side to use their land. Some also ask other suppliers to sell the fruit to them on an ad hoc basis if demand spikes," he said, adding that errant firms pay farmers to use their land for oil palm.

On paper, the land is owned by the farmer and the firm is not implicated. There is also no map of land ownership available, making the task of pinpointing the owners of a plantation difficult.

"It is true it can be difficult. But retailers have to ask suppliers to show them certification," said Prof Ang. "Consumers also have a role to play to demand higher standards."

The Forest Stewardship Council (FSC), an international organisation, has certified 111 companies here to use its trademarks on products. FSC's Asia-Pacific regional director Alistair Monument said that every player in the supply chain for these products is audited yearly.

Paper mills involved, for instance, have to keep records of inputs and outputs so that the origin of the fibres can be checked.

A version of this article appeared in the print edition of The Straits Times on October 08, 2015, with the headline 'More firms on board for 'haze-free' declaration'. Subscribe
Topics:
More
Whatsapp Linkedin FB Messenger Telegram Reddit WeChat Pinterest Print Purchase Article Copy permalink