Building an 800m stretch of the North-South Corridor (NSC) expressway through a forest in Sembawang could result in negative impact to the biodiversity in the area, including to critically endangered species like the Sunda pangolin and the straw-headed bulbul.

But the impact can be mitigated by measures such as transplanting trees and reinstating habitats once the works are completed, according to an environmental impact study (EIS) report on the project.

The viaduct will cut through a patch of forest between Sembawang Road and Lentor Avenue, south of Yishun Avenue 1. The site is currently used as a training ground by the Ministry of Defence.

The report, released by the Land Transport Authority (LTA) last month, said the most significant part of the forest is the area dominated by native species to the west of Sembawang Road.

This area will remain relatively untouched, the report noted, as the construction will be done largely within the area to the east, which consists of a mix of native and introduced species.

"Negative impacts on species of conservation value will largely be avoided after the implementation of mitigation measures," it added.

To reduce plant and animal death as well as habitat loss, the report suggests erecting temporary hoarding to limit the amount of forest that needs to be cleared.

"Given the nature of the project, the clearance of some areas with threatened plant species is unavoidable. In such cases, we recommend the salvaging of saplings and small individuals of plants of conservation value," the report said.

Trees to be transplanted should be identified, and selected native species should be replanted on roadside verges, it noted. Tree protection zones should be established around trees that are to be retained.

Other recommended measures: Before felling any trees, a visual check should be done to ensure no birds are nesting there. Tree hollows should also be checked for animals like the Sunda pangolin. If there are any found, they should be moved or herded away from the site before hoarding is put up to prevent them from re-entering. 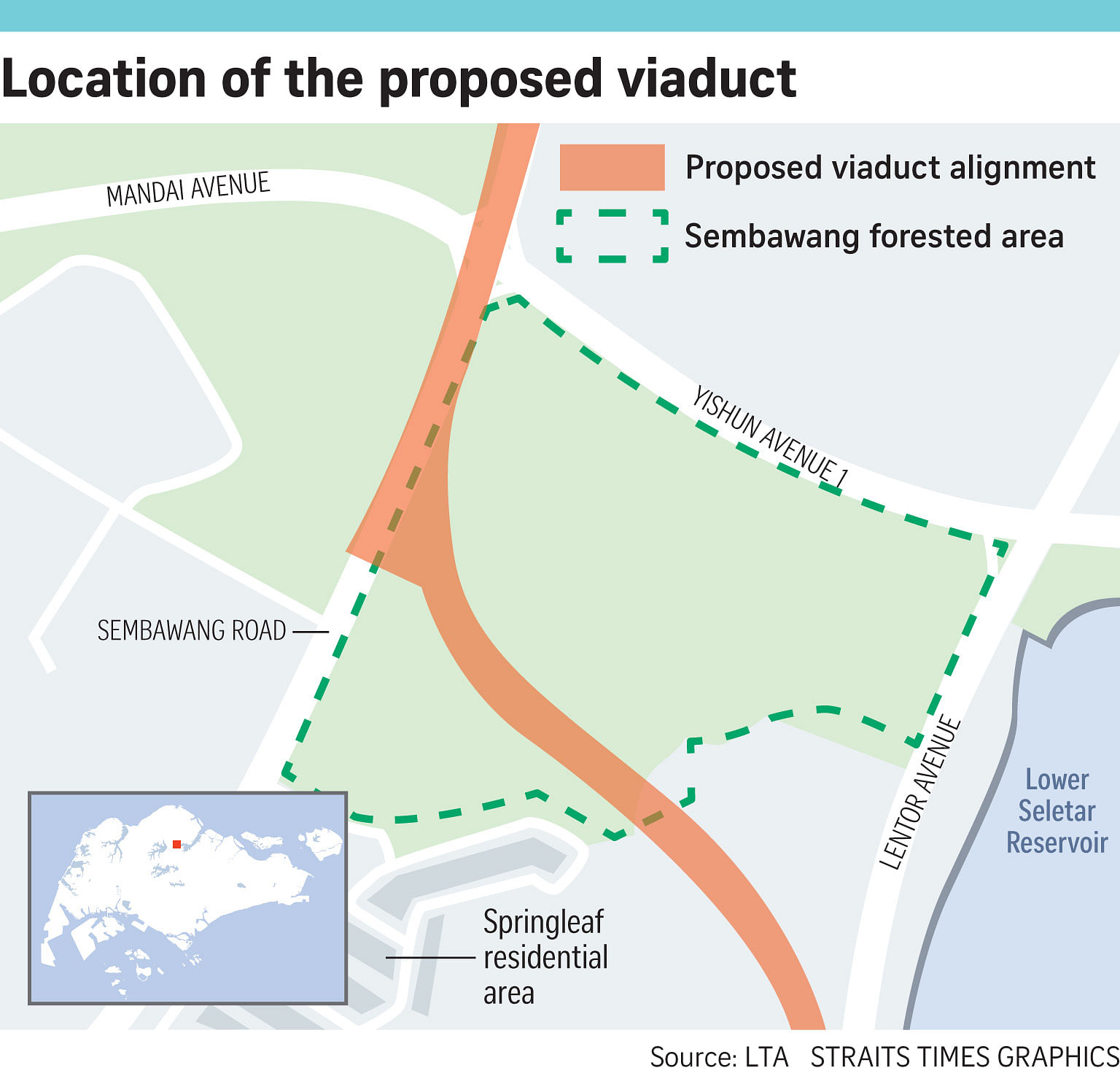 The report also recommended reinstating habitats, where possible, once the works are completed.

The site is located about 1.5km from the Central Catchment Nature Reserve and is also near other forests. This makes it suitable for many species, especially flying or gliding animals, the report said.

It noted that the location of the viaduct was chosen based on safety and land use considerations.

Given the nature of the project, the clearance of some areas with threatened plant species is unavoidable. In such cases, we recommend the salvaging of saplings and small individuals of plants of conservation value.

The viaduct cannot be moved farther north as the entry ramp would be too close to the junction of Sembawang Road and Yishun Avenue 1, which would cause "unsafe weaving of traffic", the report said.

It also cannot be moved farther south as it would then be too close to the nearby Springleaf residential area, it added.

In response to queries, the LTA said it will implement the recommended mitigation measures, including the retention of a corridor between forested areas during the construction phase and the erection of roadside barriers, to reduce impact.

An LTA spokesman said the authority had, together with the National Parks Board, engaged representatives of nature groups last December to run through the EIS findings and the mitigation measures.

"We will continue to engage and work with nature groups as well as technical experts to ensure all the recommended mitigation measures are implemented and adjusted where necessary."

The report is available on the LTA website, and members of the public can send their feedback to the authority, the spokesman said.

When completed in 2027, the 21.5km NSC will connect towns in the north like Woodlands to the city centre, and ease traffic along the Central Expressway and major arterial roads such as Thomson Road and Marymount Road.

Location of the proposed viaduct

A version of this article appeared in the print edition of The Straits Times on May 04, 2021, with the headline 'Measures can be taken to lower green impact of viaduct works'. Subscribe
Topics:
More
Whatsapp Linkedin FB Messenger Telegram Reddit WeChat Pinterest Print Purchase Article Copy permalink