SINGAPORE - Work to chop down a hundred-year-old tembusu tree to prevent it from becoming a safety risk began on Thursday (Nov 16) and is expected to be completed by Saturday.

The 30m-tall tree is located within the premises of St George's Church in Minden Road. It was found by an arborist to have hollows in its trunks. Its bark was also charred in certain areas.

The church plans to use the wood from the tree to make a memorial bench.

The tree had apparently been struck by lightning several times over the years, a church representative told The Straits Times on Thursday.

Preparatory work was ongoing when The Straits Times visited the church at about 9am on Thursday. There were "Tree Felling" signs warning people to keep clear, as well as diagrams showing drop zones where branches could fall. The roofs of the church nearest to the tree were also covered with tarpaulin.

The church decided to get the tree inspected after a tembusu tree fell in the Singapore Botanic Gardens in February, killing a woman.

An arborist from ArborCulture was hired around July, and investigations later found that the tree was unhealthy and may pose a risk of falling.

"The decision to cut down the tree was made to safeguard the safety of parishioners, and the building itself," said the church representative. 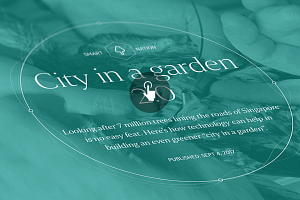 How smart technology is helping Singapore look after 7 million trees

The church had been gazetted a national monument in 1978 for its historical and architectural significance. It was designed by British architect William Henry Stanbury, and built in 1910 to cater to British soldiers living in the Tanglin barracks.

In response to ST queries, Mr Ng Cheow Kheng, group director for horticulture and community gardening at the National Parks Board (NParks), said about 20 heritage trees have been removed in the past five years due to poor health or storm damage.

To qualify as heritage trees under NParks’ scheme, the tree has to be growing healthily, have a girth of more than 5 metres and hold botanical, social, historical, cultural and/or aesthetical value, he added. There are 265 trees under NParks' heritage tree scheme, which aims to conserve Singapore's mature trees.