SINGAPORE- Air quality is expected to be in the low to mid sections of the unhealthy range for the next 24 hours as hazy conditions will likely persist, said the National Environment Agency (NEA) in its latest advisory on Monday.

Hazy conditions are expected as prevailing winds are forecast to blow from the south-east or south. There will also be reduced visibility if PM2.5 concentration levels are elevated, added NEA.

In the meantime, hazy conditions improved on Monday as a shift in prevailing winds kept away the denser haze from Sumatra.

The total number of hotspots detected in Sumatra on Monday was 233, with moderate to dense smoke haze persisting in parts of central and southern Sumatra, said the agency. 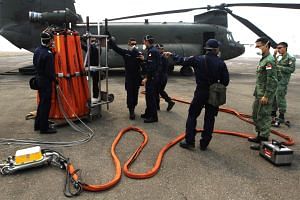 Some haze from Kalimantan is also observed to have spread to the sea areas south-east of Singapore.

On Saturday, strong winds carried the haze from fires in Indonesia's Central Kalimantan to Sulawesi Island to its east for the first time this year.

While the multinational effort to fight the fires in Sumatra for the past week has had some success, the dry weather in Indonesia, made worse by an extended El Nino season, has made it harder to extinguish the fires completely.