SINGAPORE - The haze took a turn for the worse on Monday (Oct 5), as the 24-hour Pollutant Standards Index (PSI) edged back into the unhealthy band.

Many parts of Singapore had experienced comparatively better weather on Sunday, with the 24-hour PSI dropping into the moderate range due to favourable winds that prevented denser wind from being blown in from Sumatra.

But an update from the National Environment Agency at 5pm on Monday noted a deterioration in the haze conditions in Singapore, as prevailing winds blew haze from Kalimantan towards Singapore.

Haze from Kalimantan has still been observed in the seas south-east of Singapore, with widespread haze spotted in central and southern Sumatra as well. However, conditions are expected to improve slightly.

"For tomorrow (Tuesday), the prevailing winds are forecast to blow from the east-northeast or east-southeast," said NEA in a statement. "A slight improvement in the haze conditions may be expected." 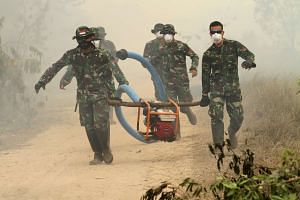 While Singapore was granted a breather from the haze, Malaysia bore the brunt of it as air pollution hit hazardous levels over the weekend.

The Malaysian authorities ordered all schools, except those in Kelantan, Sabah and Sarawak, to be shut for two days starting on Monday.

In South Sumatra, Indonesia has deployed an additional 2,100 troops - bringing the total personnel there up to 3,7000 - to help combat fires, following a sudden surge in hot spots on Sunday.