SINGAPORE - Air pollution levels remained unhealthy on Tuesday (Oct 20) morning, with the haze particularly bad in the west of Singapore.

Air quality had deteriorated sharply overnight, with the three-hour Pollutant Standards Index (PSI) - which is not tied to a health advisory - spiking at 224 at midnight.

The three-hour PSI stood at 78.

But there was some cause for concern on Monday night, when the one-hour PM2.5 reading in the west soared to 471 at 11pm, believed to be the highest reading this year.

Other regions in Singapore registered readings of between 51 and 299, with the south and central parts hitting 299 and 130 respectively.

PM2.5 refers to toxic particles that are 2.5 microns or smaller, which are usually emitted by forest fires, vehicles and power plants, among others.

The National Environment Agency's (NEA) last update at 11pm on Tuesday indicated that the worsening haze starting at around 9pm was due to denser haze from the seas of Singapore being blown in by the prevailing south-southeasterly winds.

While a gradual improvement in conditions had been forecasted, it warned that the haze is expected to persist and visibility reduced should PM2.5 concentration levels become elevated. 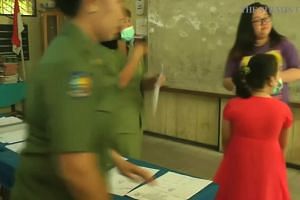 The 24-hour PSI is expected to stay in the low to mid sections of the unhealthy band for the rest of Tuesday.

Meanwhile, the Philippines has also not been spared from the haze - three cities in the country's southern island of Mindanao were blanketed in a thick haze said to have originated from raging forest fires in Indonesia's Kalimantan region.

Over in Palembang, the 40-strong Singapore contingent - part of a multinational effort to help Indonesia combat the fires - has performed 47 water-bombing operations and put out 35 hotspots since operations started on Oct 10, said Defence Minister Ng Eng Hen in an update on social media Monday evening.

Firefighting efforts by the coalition force have been hampered by the lack of rain due to an extended dry spell in the region.

According to Indonesian experts, the fires are unlikely to be put out within the next month or two. This means that the crisis could persist into the new year, said Dr Herry Purnomo of the Centre for International Forestry Research.

He added that hot spots have also been detected in Papua, a region usually spared such fires, because "people are opening new agriculture areas, like palm oil".