At the Eden PurelyFresh Farm in Lim Chu Kang, farmers will not have to till the soil as much while growing vegetables for much longer.

"Erratic weather, made more unpredictable by climate change, is a big challenge to traditional outdoor, soil-based vegetable farming," he said.

Mr Khoo, who also owns a vegetable import business, took over the farm in 2004 to ensure stability in supply and quality of crops sold to consumers.

As an importer with overseas farms, he was at risk of sudden supply disruptions and poor quality produce, and thought that producing his own crops would mitigate this.

He also wanted to go high-tech, but the farm's impending lease expiry in 2021 gave him pause.

He is now preparing to bid for new land. If successful, he plans to harness technology to farm vegetables, to have greater control over elements such as weather conditions, space efficiency and productivity.

Among the new systems he is considering is an indoor, multi-tiered vertical farming system, which is being developed by his farm and the Agri-Food and Veterinary Authority (AVA). 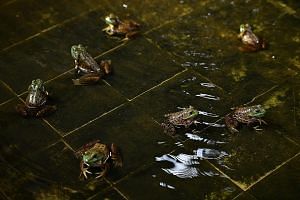 Technology in farming: Difficult for all to apply 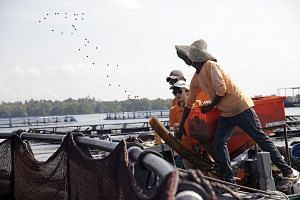 In this system, seedlings are stacked in tiers and watered by an automatic recirculating water system. As it is used indoors, temperature is controlled and light is continuously supplied to the plants for 12 hours, said an AVA spokesman.

"Resources such as manpower and water can be better utilised and reduced. The period of time needed for the seedlings to grow will also be reduced due to a consistent lighting and growing environment."

"Thus far, results have been promising for two varieties of Chinese cabbage and xiao bai cai. (Eden PurelyFresh Farm) is keen to include the two varieties in its farm and is working with AVA to import the seeds," said AVA.