SINGAPORE - Hailstones reportedly fell in some areas in Singapore including Yishun and Seletar during a bout of heavy rain on Tuesday evening (Jan 30).

A reader who gave her name as Madam Lee M.L. told The Straits Times that she was in her Yishun home at about 4.45pm when she noticed a clattering sound amid the rain.

"The rain came quite suddenly, there was very loud thunder and lightning as well," said the 47-year-old, who lives on the fourth floor of a condominium.

"When I looked out of my balcony, I saw some white cubes hitting on the glass door of the balcony. I thought it looked like ice cubes."

Madam Lee said there were about five hailstones that were the size of five cent and 10 cent coins.

Videos she sent in to ST show small pieces of what appear to be hailstones raining down onto the balcony floor of her home.

"It's so amazing to see this at my balcony," she said. "I've seen snow before but not hail."

Another reader, Ms Junawati Ashak, told ST that it "rained ice" at Seletar Airport at around 4.30pm.

Ms Junawati, who works as a receptionist at Jet Aviation Singapore, said she was working at the lobby when she saw the sky darkening outside.

"It rained very heavily and there was a storm with very strong wind," she said. "Then the rain came down with ice."

Ms Junawati said some of the hailstones came through the sliding doors into the lobby.

Hail is rare in Singapore but not unheard of.

In 2014, hailstones were reportedly seen in Turf Club Road during a heavy downpour. In 2013, a rare hailstorm uprooted trees and disrupted traffic.

The last reported incidence of hail before this was in 2009. 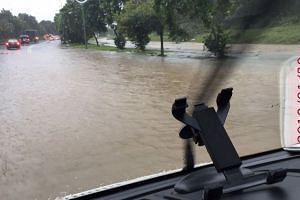 According to the National Environment Agency's (NEA's) website, hail is produced only by cumulonimbus or thunderstorm clouds.

The stones consist mostly of ice, measuring between 5mm and 50mm in diameter, with larger stones occurring in severe thunderstorms.

Hail forms in strong thunderstorm clouds with intense updrafts and where a good portion of the cloud layer is below 0 deg C.

Hail is less common in the tropics despite a higher frequency of thunderstorms because the atmosphere over the tropics tends to be warmer over a much greater depth.