Latest figures from the National Environment Agency show that Singapore last year generated 7.7 million tonnes of solid waste, down slightly from the 7.81 million tonnes in 2016.

The Republic lists "Towards a zero-waste nation" as one of the five broad areas under the Sustainable Singapore Blueprint 2015, which contains a series of environmental goals to be met by 2030.

Singapore's National Recycling Programme was launched in 2001 to carry out fortnightly collections of recyclables from Housing Board blocks and landed homes.

In 2009, this was extended to cover all households when condominiums were required by law to provide recycling receptacles within their estate grounds. 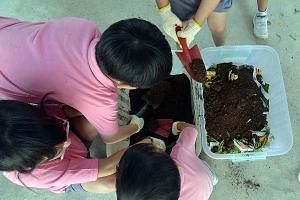 From 2011 to 2014, standardised blue recycling bins - labelled with information on what can and cannot be recycled - were introduced.

All HDB blocks and landed homes are now provided with a recycling bin each, with more frequent collections. And since 2014, all new public housing developments launched have been fitted with dual chutes for refuse and recyclables.

From April 1 this year, dual chutes will be extended to new non-landed private residential developments taller than four storeys.

From Aug 1, all existing condominiums will also have to provide one recycling bin per block.

In Singapore, most waste is incinerated, except for those forms that cannot be burnt because they would cause too much pollution to the environment or damage to the incineration plant. The non-incinerable waste, as well as the ash from the incinerable waste, would then be transported to Singapore's only landfill on Pulau Semakau.

Opened in 1999, the landfill was expected to last until 2045, but projections based on Singapore's current rates of disposal show that it may now last only until 2035.