All lanes of the roads were affected but traffic remained passable on Yuan Ching Road, national water agency PUB said in a statement.

The floods subsided in 40 minutes, and PUB officers were onsite to investigate and offer assistance to members of the public.

PUB said that a convergence of winds led to the development of thunderstorms in several parts of the island on Saturday, and around 80mm of rain was recorded over one hour over the West Coast area, which is about 25 per cent of the average monthly rainfall for the entire month of December.

According to PUB, Singapore is currently experiencing the north-east monsoon.

Short-duration thundery showers are expected in the afternoon and evening on six to eight days in the second half of December.

More intense thunderstorms are also likely on one or two days towards the last week of the year, due to a surge of monsoon winds over the South China Sea. Occasional windy conditions can also be expected. 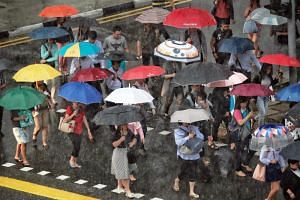 Thundery showers expected for the rest of December: Weatherman

PUB urges the public to exercise caution and avoid stepping into or driving into flood areas. Members of the public are also advised to stay tuned to radio broadcasts and PUB's Facebook page or the MyWaters mobile app for flood updates during heavy rain.