SINGAPORE - The number of new dengue cases last week remained below the 100 mark as the National Environment Agency (NEA) urged the public to keep up the momentum in the fight against the mosquito-borne virus.

According to statistics on the NEA's dengue website, there were 86 cases reported last week - three more than the previous week.

While NEA had initially warned in February that cases this year could hit a historic high of over 30,000 cases, this now appears unlikely as the weekly figure has fallen markedly over the last two months.

Instead, it has urged the public to maintain efforts to suppress the Aedes mosquito population. The mosquito is responsible for transmitting both the dengue and Zika viruses, as well as yellow fever and chikungunya.

Dengue clusters across the island have also been on the decline. As of Monday, 12 clusters remain - down from 13 the previous week - with two classified as high risk. 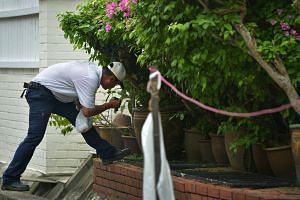 The cluster at Yishun Avenue 4 and Yishun Street 61 remains the highest risk with a total of 82 cases, including two in the past fortnight.

There have been eight dengue deaths this year - twice the number compared to 2015. The latest victim was an 11-year-old boy who died on Aug 30.

The trial will be extended to two other estates in Nee Soon East and Tampines West this month.