SINGAPORE - The number of new dengue cases plunged to a new low last week, falling below the 100-mark for the first time in 2016.

There were 95 cases of the mosquito-borne virus last week - 29 fewer than the previous week, according to the latest figures from the National Environment Agency's (NEA) dengue website.

It was the sixth straight week that the weekly figure had declined.

Despite the recent drop in cases, NEA urged the public to remain vigilant and work together as a community to suppress the Aedes mosquito population and keep cases in check.

On Aug 30, an 11-year-old boy who lived in Woodleigh Close became the latest victim of dengue. His death brought the number of people who have died from it this year to eight, twice the number recorded in 2015.

The NEA on Tuesday morning released male Aedes aegypti mosquitoes carrying the Wolbachia bacteria at Braddell Heights Housing Estate, as part of a small-scale trial to control the spread of dengue.

Male mosquitoes do not bite or transmit diseases. When those carrying the naturally occurring bacteria mate with female mosquitoes, it causes them to produce eggs that do not hatch.

A demonstration showing that male mosquitoes do not bite

The trial will be extended to two other estates in Nee Soon East and Tampines West within the next one month. 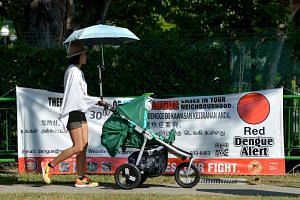 Dengue-fighting efforts were also given a boost earlier this month when the Health Sciences Authority gave the green light for Singapore to get the world's first dengue vaccine.

It had been studying the vaccine since March and fast-tracked its approval process due to public health concerns.

Meanwhile, there were 23 dengue clusters across the island as of Monday, with four classified as high risk.

The cluster at Yishun Avenue 4 and Yishun Street 61 remains the highest risk with a total of 72 cases, including three in the past fortnight.