SINGAPORE - The total number of dengue cases in 2016 has surpassed the figure for the whole of last year, according to the latest updates on the National Environment Agency's (NEA) dengue website.

Last week saw dengue cases rise for the third straight week to hit 311, the first time since March that the weekly figure has exceeded the 300 mark.

With Singapore currently in the traditional peak dengue season, NEA has repeatedly warned that it is anticipating an upward trend in the number of cases in the coming months. 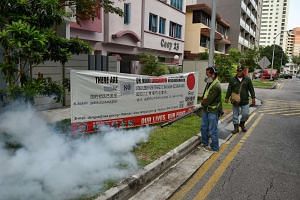 "NEA encourages everyone to join in the collective effort to help stop the dengue transmission cycle by doing the five-step Mozzie Wipeout." There are currently 59 active dengue clusters across the island, with 13 classified as high-risk.

A cluster in Bedok is the highest risk with a total of 50 cases, including 10 in the past fortnight.