That cup of coffee at the kopitiam is unlikely to increase in price even with water prices going up in July.

Businesses yesterday told The Straits Times that water does not make up a significant part of total expenditure and so, it is unlikely they will have to pass on the higher cost of water to consumers.

"Water makes up between 5 and 10 per cent of business costs for coffee shop stalls, so I don't think the hike will affect the operators much - the price for a cup of coffee is unlikely to increase for customers," said Mr Hong Poh Hin, chairman of the Foochow Coffee Restaurant and Bar Merchants Association, which represents 400 coffee shops.

Mr Tan Thiam Yong, managing director of car-grooming company Groomwerkz, which has outlets in Senang Crescent and the Esplanade, said the firm spends about $3,000 on water every month. "It is unlikely that we will raise prices for a car wash from the current $10 for now, as it may not be justifiable and customers may run away," said Mr Tan, adding that water accounts for about 5 per cent of total costs.

However, some businesses have expressed concern following news that water prices will be up by 30 per cent by July 1 next year. 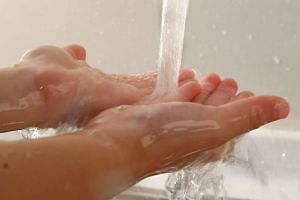 PM ON HELP MEASURES IN BUDGET

Budget 2017 includes many measures to prepare ourselves to grow in the midst of uncertainty.

Immediate measures to boost the economy include corporate tax rebates for companies, helping SMEs to build their digital capabilities, and bringing forward $700 million of public sector projects to boost the construction industry.

This support will help people cope with the cost of living, including the higher water tariffs. Water is a precious and strategic resource which we must husband.

It will be Singapore's first water price hike in 17 years, and was announced on Monday by Finance Minister Heng Swee Keat when he delivered the Budget. He said for three-quarters of businesses, the rise will be less than $25 per month.

But Mr Kurt Wee, president of the Association of Small and Medium Enterprises, said the water price hike will impact manufacturers and industries that use a lof of water and they may not be able to absorb the extra costs.

A management agent of a condominium management firm which oversees 18 condos, who spoke to The Straits Times, said he hopes other operational costs do not rise as well. "Taken alongside rising wage costs of cleaners and security guards, all these will have to be factored into the budget. If the management fund is insufficient to cover the costs, residents will have to pay higher maintenance fees which range from $400 to $900 for each quarter now."

The management agent, who declined to be named, said water costs make up between 10 per cent and 15 per cent of operating costs at each condo estate.

Ms Lim Rui Shan, executive director of the Restaurant Association of Singapore, said it would have been ideal if companies were given more time to develop strategies to counter the price hike or plan for cost- cutting in other areas.

That is exactly what Groomwerkz's Mr Tan is doing with a water recycling and purification system he is planning to introduce at the Senang Crescent outlet by year- end. The system will allow up to 80 per cent of water used in washing cars to be recycled. The system will set him back by at least $30,000, but he said it will help him save water - and lower costs - in the long run.

She recently witnessed a cleaner spraying running water to clear a leaf at a toilet in East Coast Park instead of using a broom.

"A price hike will make no difference to contracted workers if training is not done hand in hand with the Save Water Campaign as they do not pay the bills," she said.

Mr Sean Yeo, 37, whose family of five lives in a condo in Tampines, said: "It is a bad time to raise water prices as the economy is not doing well and oil and electricity prices are already going up. The increase will be substantial over time and likely to squeeze middle-class families."

Families living in one- to four-room HDB flats will receive annual Utilities-Save rebates to soften the impact of the increase.

MP Louis Ng, chairman of the Nee Soon Town Council, said there is a limit to how much water can be saved, as town councils use water to keep areas clean.