Visitors to Ms Canny Teo's house sometimes tell her they feel cold, even though she does not use air-conditioning.

The 49-year-old housewife's home at 51, Joo Chiat Terrace does not have electronic gadgetry to monitor and regulate temperature.

"We have 25 people in the living room and there's no need for air-con," said Ms Teo of the weekly family gatherings in the renovated shophouse built in the early 1900s.

The secret? Traditional architecture for the tropics combined with good interior design help keep things cool with lower energy consumption, as fans could take the place of air-conditioning.

The house, which bagged one of the Urban Redevelopment Authority's Architectural Heritage Awards in 2012, exemplifies a growing trend in building design here as Singapore redoubles its efforts in green buildings. Just last week the Building and Construction Authority (BCA) held the annual Singapore Green Building Week.

They exploited this by putting the kitchen and living room - which have no walls to block wind - on the second floor instead of the ground floor, as these facilities are usually warmer and more people gather there.

IT'S IN THE DESIGN TOO

People are always thinking of new technology, but good design can make a difference too.

To cool the house further, they installed rotating vents in the roof that let rising hot air escape from the house while keeping the rain from coming in.

"People are always thinking of new technology, but good design can make a difference too," Ms Arango added.

An even older shophouse at 157, Neil Road has been preserved in near-original condition, showing other features that enhance ventilation.

Built around 1890 and now housing the National University of Singapore's (NUS) Baba House museum, it has a central air well open to the sky, where hot air rises and draws cooler air in from the windows.

Other tricks include louvre windows that keep out the rain but let air through and interior walls with vents near the ceiling that allow air to pass through the building.

However, Associate Professor Tham Kwok Wai, at NUS' School of Design and Environment, said that higher real-estate prices have forced many houses into compact box-like designs with limited space for the traditional features.

He noted that while they enhance circulation, such features may let in polluted air from traffic or haze, or compromise privacy by allowing sound to travel between rooms.

But some compromise can still be found, as evidenced by the National Library Building in Victoria Street, which won BCA's Green Mark Platinum Award in 2005. 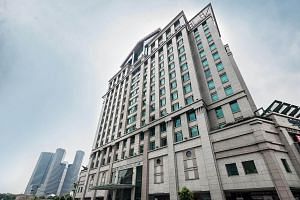 Local firm DP Architects, the building's project architect, said that despite being an air-conditioned "glass box" to preserve its literary treasures, the building is festooned with distinctive horizontal fins inspired by the large shady eaves of old houses, ultimately reducing the energy needed to cool the building.

This is taken even further by the gigantic air well in the middle of the building, through which warm air rises and dissipates through large openings on different levels of the building.

Mr Jeremy Tan, a director at DP Architects, said: "There are lots of lessons we can learn from vernacular buildings. But we have to interpret it in today's context and meet today's needs creatively."

A version of this article appeared in the print edition of The Straits Times on September 18, 2017, with the headline 'Cool ideas and green lessons from the past'. Subscribe
Topics:
More
Whatsapp Linkedin FB Messenger Telegram Reddit WeChat Pinterest Print Purchase Article Copy permalink