Over the past five years, Singapore's fish farmers have seen an oil spill and two harmful algae blooms killing off their fish.

It has been one unfortunate event after another, and fish farmers told The Straits Times that they are uncertain about the future of coastal fish farming here.

"There's this sense of nervousness about how much fish we should farm. Fish farming, being what it is, requires a long time to reap returns," said a 50-year-old fish farmer who declined to be named.

Another blow came two weeks ago when he had to cancel orders worth about $10,000 - or 25 per cent of a month's revenue - after an oil spill occurred off Pasir Gudang Port in Johor.

His farm was among 12 told by the Agri-Food and Veterinary Authority (AVA) to stop sales while it conducts food safety tests.

He said: "If your harvest is wiped out, the work you've put in for nine to 12 months goes into the water."

In urbanised Singapore, fish farms have managed to thrive. There are 117 Singapore coastal fish farms in the East and West Johor Strait, and the southern waters, where most rear their fish in net cages in the sea. There are another six fish farms on land.

The farms mostly produce fish for Singapore's consumption. In 2015, they produced 5,300 tonnes of fish, accounting for about 10 per cent of fish eaten here, said an AVA spokesman. 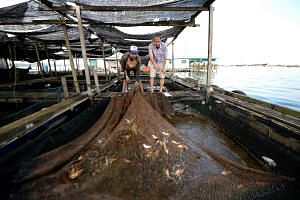 In 2011, the Government began a push to increase this percentage to 15 per cent to boost food security. A $63 million fund was launched by the AVA to help farmers boost their yields and raise productivity and the AVA has disbursed more than $1.5 million under its funding schemes so far for fish farmers  to purchase contingency related equipment for algae blooms.

But events in the past few years have put a dent in that ambition.

A total of 77 farms were affected by the algae bloom that took place between February and March 2015, wiping out an estimated 500 to 600 tonnes of fish. This followed another bloom in 2014.

And the problem is unlikely to be decisively resolved.

Algae blooms flower during times of dry weather and an excess of nutrients. Some algae types kill fish by cutting off their supply of oxygen or by damaging their gills - as was the case in 2015.

Dr Sandric Leong, a senior research fellow with the Tropical Marine Science Institute at the National University of Singapore, said climate change has resulted in warmer sea water temperatures and changes in its salinity due to less rainfall, adding: "As harmful algal blooms are a complex issue, there is no single solution to this."

Fish farmer Tan Choon Teck, who has run his farm near Pulau Ubin for about 30 years, said such events seldom happened in the past, and even if they did, they were never of such severity.

He was also affected by the oil spill on Jan 3 and was forced to suspend sales. "Business is definitely affected. In the lead-up to Chinese New Year, I always prepare fish, prawns and lobsters for sale. This is the time when demand is high and we can sell our produce at a premium," said the 54-year-old.

The AVA spokesman said that after the oil spill, fish farms have reported fish mortalities that totalled about 650kg as of last Friday. "Most of the farms in the same area did not report any fish mortality. There is minimal impact to supply," she said.

Experts say farmers need to adopt new ways of farming if they want their trade to be sustainable. Lining net cages with canvas bags, for instance, could help to minimise losses.

Another way is to simply move inland. But aquaculture specialist Matthew Tan from Nanyang Technological University said: "Fish farmers are reluctant to move away from the traditional way of farming as the cost is much less than for land-based farms. They need to change their mindset."

Mr Frank Tan, 42, is among those doing so. His farm in the East Johor Strait started out as a fully coastal farm rearing fish like red snapper and seabass. But he has since moved half of his fish rearing inland, and plastic pipes are used to line the exterior of his net cages to prevent oil spills from getting to his fish.

"We decided to move inland in 2015. The double blow we experienced was devastating," he said, referring to the algae blooms in 2014 and 2015.

Correction Note: This article has been edited for clarity.