Investigations have yet to uncover the cause of the caustic chemical stench that cloaked parts of the island on Monday, but experts have so far ruled out volcanic action in Bali and the haze.

Air pollutants tracked by the authorities, such as sulphur dioxide, carbon monoxide, ozone and nitrogen dioxide, were also normal, following checks by officers from the National Environment Agency (NEA) and Singapore Civil Defence Force on Monday.

These gases are usually emitted from vehicles or factories that burn natural gas.

The NEA, which has been monitoring air quality, including volatile organic compounds (VOCs), across the island, said last night that air quality and VOC levels continue to remain within safety limits.

Some VOCs may have short-and long-term adverse effects on health.

On Monday, complaints first poured in from residents in Sengkang and Punggol about an acrid, chemical stench that was later detected by people in estates such as Ang Mo Kio, Yishun, Seletar and Bishan. Thick smoke also hung over some of the affected areas, residents said. 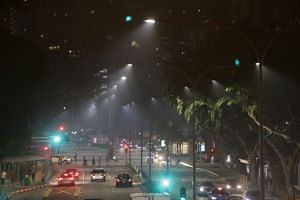 Some residents suggested the smell was from the town of Pasir Gudang in Johor, where a large zone of its 311 sq km is dedicated to heavy industries, and where fumes and pollutants have strayed to Singapore in past incidents.

Just last week, a fire broke out at a chemical factory there, creating thick smoke and causing thousands working and living around the area to panic.

But when contacted yesterday, people working there said there was nothing out of the ordinary on Monday afternoon.

According to the NEA, "checks conducted at industrial plants in the north-eastern parts of Singapore showed that they were operating normally".

The agency said it will continue to investigate the source of the chemical smell.

Meanwhile, experts have ruled out volcanic action in Bali and the haze.

Associate Professor Koh Tieh Yong of the Singapore University of Social Sciences said: "The winds were not coming from Bali yesterday. Bali is over 1,500km away. For a stench to travel so far and still smell so strong is highly unlikely."

The weather expert added that gases diffuse as they travel, and for it to smell so strong here, the compound had to be very concentrated at its source. There has been no report of a strong stench in Bali.

According to the NEA's daily haze update on Monday, the 24-hour Pollutant Standards Index (PSI) was in the low end of the moderate range at 6pm. The hourly concentration readings for PM2.5 - tiny pollutant particles associated with haze - was also in the normal band.

This means the air quality levels were within safety limits and, after yesterday's thunderstorm, the NEA said it received no further complaints of the stench from residents.

Ms Lelavathi Annamali, 68, who lives in Ang Mo Kio Avenue 8, said the strong kerosene smell that had stung her eyes on Monday night had largely dissipated by yesterday morning.

"Then the rain came at about 11am, and it was completely gone," said the retiree.

Slightly hazy conditions are expected in Singapore this morning and thundery showers in the afternoon, said the NEA.

The 24-hour PSI is expected to be in the moderate range, and the hourly concentration readings for PM2.5 normal.

A version of this article appeared in the print edition of The Straits Times on September 27, 2017, with the headline 'Cause of chemical stench still a mystery'. Subscribe
Topics:
More
Whatsapp Linkedin FB Messenger Telegram Reddit WeChat Pinterest Print Purchase Article Copy permalink