Scientists say it is unlikely that a return of the haze is to blame for a burning smell noticed by residents across Singapore over the past few days.

Even though there have been land fires in peninsular Malaysia and Indonesia, Pollutant Standards Index (PSI) readings show that these hot spots are unlikely to be the cause of the acrid stench.

"During the last two weeks, the PSI has been around the low moderate range, which reflects the typical air pollution conditions of Singapore," said Dr Erik Velasco, a research scientist from the Singapore-MIT Alliance for Research and Technology. 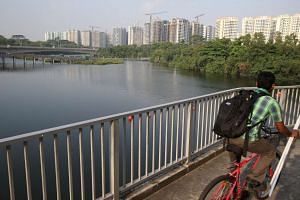 PSI reading edges up on Tuesday evening, peaking at 87

"When haze from wildfires in neighbouring islands starts affecting Singapore, the PSI moves to the high levels of the moderate range, reaching unhealthy levels on some occasions."

Dr Santo Salinas, a senior research scientist at the Centre for Remote Imaging, Sensing and Processing at the National University of Singapore, added: "The smell could be due to local burning. So far, the hot spots are very few in Malaysia and Riau, Indonesia."

The Singapore Civil Defence Force (SCDF) said it has responded to four small bushfires here since last Saturday, the largest of which was only 1.5m by 1.5m in dimension.

All were extinguished with either a hose reel or buckets of water and they are thought to have been too small to be behind the burning smell.

Banker Berlina Lim, 47, noticed the smell at her Hougang home last Saturday and on Tuesday night.

"It was bad enough that both my mum and I thought someone was burning incense downstairs at my block," she said.

"Subsequently, I read on a friend's Facebook account that the haze is back. I would be concerned if it worsens or continues."

The north-east monsoon conditions are expected to weaken over the next two weeks, giving way to the inter-monsoon period.

A spokesman for the Meteorological Service Singapore (MSS) said the period between April and May is typically characterised by prevailing winds that are light and variable in direction.

"During this period, the winds could occasionally blow from the west or south-west, bringing in any haze from Sumatra," he said.

"Whether Singapore is affected by transboundary smoke haze would also depend on other factors, including the location and extent of the fires in Sumatra, and the occurrence of rain."

Singapore suffered from one of its worst bouts of haze last year with the extended El Nino season - a weather phenomenon which causes temperatures in the Pacific Ocean to rise, affecting weather patterns in the region.

The rising temperatures and drier weather in turn make fires harder to put out.

The MSS said it is unlikely that the haze has returned, with the spokesman adding: "Over the past few days, the prevailing winds over our surrounding region were blowing from the north-east and fewer hot spots were detected in Sumatra."