SINGAPORE - The famous Bishan-Ang Mo Kio Park otters, also known as the Bishan 5, have made their appearance again - this time with five new additions to the original family of five.

In a Facebook video shared by Fast Snail, the pups are seen frolicking in the water under the watchful eye of the other family members, before being guided, and some even carried, by the mother otter.

The pups, estimated to be about 1½ months old, were said to have been born in December last year. 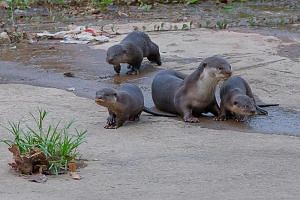 While the exact location where the video was taken was not revealed in the post, Fast Snail said the otters often roam about in Kallang Basin and Marina Bay, and those who wish to find them will "need luck and patience".

What started out as just a pair of male and female otters spotted in Bishan-Ang Mo Kio Park became a family of five when three pups were born in April last year.

Videos and photos of the couple and their "SG50 triplets" became viral on social media.

In October 2015, the Bishan 5 gave staff and students of St Andrew's Junior College a pleasant surprise when they roamed the school's compound.

Wild otters have been spotted at Gardens by the Bay, Botanic Gardens and East Coast beach, and even at heartland areas such as Bishan-Ang Mo Kio Park, Pasir Ris Park and the Punggol Waterway.

An otter delight at Gardens by the Bay 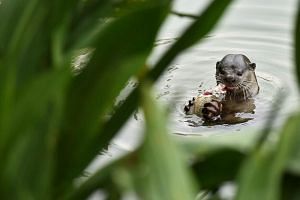 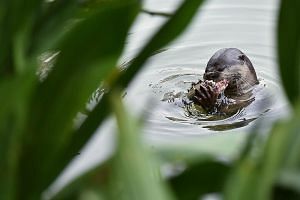 Otters are threatened native marine mammals, and are often found at sea but need a source of fresh water nearby.

Sixty to 100 of the "thriving" mammals may exist here now and the usually shy creatures may be getting bolder as they meet more humans, said wildlife consultant Subaraj Rajathurai in a Straits Times report in March 2014.

And while they are said to be mostly harmless, these otters have been suspected of having feasted on ornamental koi in Sentosa, reportedly costing more than $80,000, in April 2015.

"If you ever encounter the otters, observe them from a distance, stay quiet and avoid flash photography as we don't want to frighten them. Let's not feed the otters as well - they have plenty of fish from the river to feast on, which keeps the ecosystem healthy too," said National Parks Board on its Facebook page.

The Agri-Food and Veterinary Authority of Singapore (AVA) advises the public not to approach, disturb or feed any wild animals they see. Trapping them is also illegal. The public can contact AVA at 1800-476-1600 to give feedback on wildlife.