SINGAPORE - In another apparent case of illegal fishing, a wild otter from the famous Bishan-Ang Mo Kio Park pack known as the Bishan 10 has been hurt by a fishing hook.

A Facebook post by user Fast Snail on Saturday (April 2) showed a second-generation pup in distress as other otters attempted to remove a fishing line caught close to its right eye.

The pictures were believed to have been taken at a bridge along Kallang Basin. 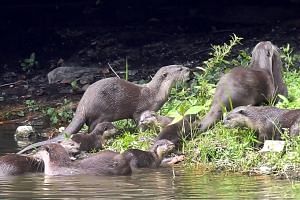 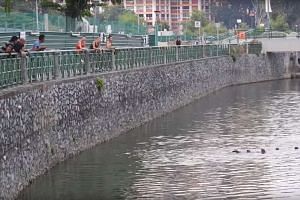 Wildlife rescue group Animal Concerns Research and Education Society (Acres) said it was made aware of the incident on Saturday evening, but have yet to locate the otters.

A spokesman said: "We appeal to members of the public to contact us if they see the otters so we can offer the necessary help. We would also like to remind the public not to fish at illegal sites."

Fishing is not allowed in waterways and anyone caught doing so can be fined up to $3,000.

Last October, a man came forward to assist police with their investigations after he was reportedly caught on video hooking an otter while fishing illegally at a stretch of the Kallang River near Toa Payoh Lorong 8.

Otters have become an increasingly common sight in Singapore in recent years, having been spotted in waterways in Bishan-Ang Mo Kio Park, Punggol Waterfront and Sungei Buloh.

The threatened native species is found in marine and freshwater habitats, thriving in mangroves, river mouths and natural shorelines.