SINGAPORE - Clearer skies were evident over many parts of Singapore as the haze receded somewhat on Sunday (Oct 4), with conditions improving further throughout the day.

But the National Environment Agency (NEA) warned in its latest update at 6pm that conditions could deteriorate slightly on Monday should denser haze be blown in from Sumatra.

As of 11pm, the 24-hour Pollutant Standards Index (PSI) had fallen to between 78 and 91, in the high-section of the moderate range.

The three-hour PSI, not tied to a health advisory, stood at 107.

NEA added that winds are forecast to blow from the southeast or east, which have thus far helped to keep denser haze from Sumatra away.

Indonesia President Joko Widodo's chief of staff, Mr Teten Masduki, told The Straits Times that the administration was doing its best to respond to the current state of emergency. 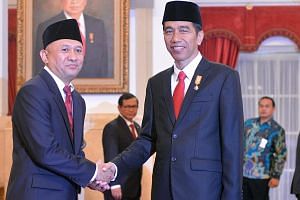 He also outlined Mr Joko's three-pronged approach to deal with the haze, which includes artificially induced measures such as cloud seeding and building canals to make it easier for landowners to "re-wet" dry peatland, and openly going after companies who practised outlawed slash-and-burn techniques to clear land.

This year's haze crisis, according to the US National Aeronautics and Space Administration (Nasa), could become one of the worst on record due to a prolonged dry season.

Nasa compared the current conditions in Singapore and south-eastern Sumatra to that of 1997, when the PSI hit a then-high of 226 and visibility plummeted to a few hundred metres.