Tests to see how a train tunnel can be built under Singapore's protected nature reserve will start soon, but with 10 extra measures to reduce any negative impact on plants and animals.

For instance, the National Parks Board (NParks) - custodian of Singapore's nature reserves - will be empowered to issue stop-work orders if pollution is detected. Nature groups will also get to observe the work as it is carried out in the Central Catchment Nature Reserve.

These measures, revealed yesterday on the back of talks between the Government and nature groups, are on top of at least nine others announced earlier - such as using enclosures to reduce engine noise and tanks to collect discharge.

Other measures include scheduling at least one rest day in between surveys, and engaging a tree expert to ensure trees are not damaged.

These were spelt out in a tender that the Land Transport Authority (LTA) called yesterday to appoint a specialist to determine the soil profile under the reserve. The tests were initially expected to start in the third quarter, but will now take place in the fourth quarter after extensive talks between the LTA and nature groups.

The groups are pushing for the 50km Cross Island Line to go around instead of through the reserve, where rare animals, such as the critically endangered Sunda pangolin, can be found.

Save time or the forest? That is the question

Nature groups told The Straits Times that they were heartened by the LTA's willingness to accept feedback. But they are still hoping it would reconsider an alternative alignment for the MRT line. 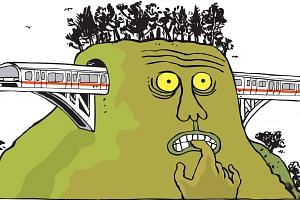 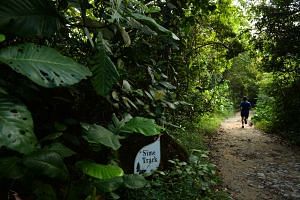 "The Nature Society was hoping that soil investigation work in the forests could have been avoided as it involves people going into sensitive parts of the forests," said Nature Society (Singapore) president Shawn Lum. "But now that they are slated to go ahead, at least the impact will be reduced."

The line, to be completed by 2030, links Changi to Jurong, passing through several housing estates. The findings of an environmental impact assessment (EIA) to examine the impact of soil investigation through the forest as well as around it was announced in February.

Another phase of the EIA, which will be completed by year-end, will assess the impact of building and operating the MRT line for both routes. Other factors, including travel time and cost, will also be weighed when deciding which route gets the green light.

SIM University economist Walter Theseira said the direct alignment will cut travel time. "While each commuter might save only a few minutes each trip, when added together, the time savings will be enormous," he explained."The indirect alignment, however, could serve additional areas."

Dr Theseira added that more needs to be done to "compare the economic benefits" of the two.

Associate Professor Donald Low, an associate dean at the Lee Kuan Yew School of Public Policy, said: "How a choice is framed can have a large effect on how people choose. If the shorter route... was presented as the status quo option, and the longer route was seen as the alternative that would cost $2 billion more and increase travel time by five to six minutes, people are more likely to prefer the shorter route.

"But if the longer route was presented as the original option, and the more direct one as the alternative that would save $2 billion but pose some environmental risks, people are more likely to favour the longer route."

•Using access routes mapped out by the National Parks Board (NParks). This restricts any damage to these areas.

•Scheduling at least one rest day between surveys which require workers to go off-trail. Mammal researcher Marcus Chua says this could allow less-sensitive animals to continue using the area.

•Nature groups will get to observe the work.

•Engaging a tree expert to suggest ways to avoid damage to trees by the heavy machinery used to dig boreholes to test the soil.

•Installing a silencer on the drill engine exhaust.

•Conducting trial runs of borehole operations and off-trail surveys outside the reserve, so as to ensure equipment is fully functional and "within the stringent requirements of working within the reserve".

•Allowing a longer period of time before resuming work after heavy rain so as to reduce soil erosion.

•Avoiding works in the rare freshwater streams, which are highly sensitive habitats.

•NParks officers can order immediate stoppage of work if there are breaches of mitigating measures, or when there is pollution.