SINGAPORE - The Straits Times won Story of the Year for a news story on the controversial name of a revamped war museum at Singapore Press Holdings' annual journalism awards for its English/Malay/Tamil Media (EMTM) group.

The report that led to the renaming of the museum bagged the top award for heritage and community correspondent Melody Zaccheus.

The National Archives of Singapore showcase had been named Syonan Gallery: War and Its Legacies, sparking a public outcry over the use of the word "Syonan".

It was later renamed as Surviving the Japanese Occupation: War and its Legacies.

Here is the list of winners at the EMTM Annual Awards 2017.

1. Journalist of the Year

2. Young Journalist of the Year

3. Story of the Year 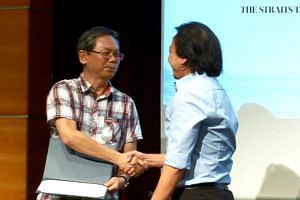 5. Tan Hui Yee for her stories:

8. Nur Adilah Mahbob for excellence in news reporting for her stories: