Yale University has expressed concern over the cancellation of a programme by Yale-NUS College that was meant to introduce students to various modes of dissent and organising resistance, saying such an action might threaten the values of academic freedom and open inquiry.

Yale president Peter Salovey said yesterday that he has asked Professor Pericles Lewis, Yale's vice-president and vice-provost for global strategy, who is also the founding president of Yale-NUS, to conduct fact-finding to better understand the reasons for the decision.

In response, a Yale-NUS spokesman said its president Tan Tai Yong and Prof Salovey had communicated on the issue once the college made the decision to withdraw the course from this year's Learning Across Boundaries programme.

"President Salovey would like a better understanding of the factors leading to this decision. We will work with (Prof Lewis) on his fact-finding," added the spokesman.

Prof Salovey said in his statement that he had expressed his concern to National University of Singapore president Tan Eng Chye and Prof Tan Tai Yong.

"In founding and working with our Singaporean colleagues on Yale-NUS, Yale has insisted on the values of academic freedom and open inquiry, which have been central to the college and have inspired outstanding work by faculty, students and staff: Yale-NUS has become a model of innovation in liberal arts education in Asia," said Prof Salovey.

"Any action that might threaten these values is of serious concern, and we at Yale need to gain a better understanding of this decision." 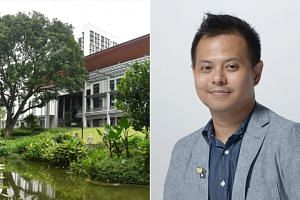 The one-week Dialogue And Dissent In Singapore course was due to start later this month, and was to have been led by Singaporean playwright Alfian Sa'at, who had a visiting appointment teaching play-writing last semester and had put up a proposal.

In an earlier report, Prof Tan Tai Yong had said Yale-NUS found, after a review, that the course did not critically engage with the range of perspectives required for a proper academic examination of the issues around dissent, among other things.

He noted that the activities and speakers proposed would have infringed on the university's commitment not to advance partisan political interests on its campus, and may have subjected students to the risk of breaking the law.

An online write-up, which is no longer accessible, of an early version of the programme had proposed activities that included film screenings and dialogues. Some of these were a panel discussion with freelance journalist Kirsten Han, veteran journalist P.N. Balji and historian Thum Ping Tjin, as well as a demonstration of forum theatre techniques.

In a Facebook post on Sunday (Sept 15), Mr Alfian said the programme is not designed to train students "to stage protests in public".

"Any comparisons with what is happening in Hong Kong right now is off the mark," he wrote.

The programme is, however, designed to guide students to think about dissent in Singapore, he added.

"What is a dissident? Why does the media persist in labelling certain individuals or groups as ‘troublemakers’? Who are they making trouble for? One of the best ways to get these insights is to meet some so-called dissidents face to face. To give the students unfiltered access. So that they can ask questions," he said.