BRUNEI - Universities have a key role to play in harnessing the potential of technology and dealing with its challenges to prepare young people to be "world-ready", said Senior Minister Teo Chee Hean on Thursday (Oct 3) in Brunei.

To enable graduates to contribute and create new value in whatever career they pursue, universities need to equip them with key attributes.

These include creativity and innovation; communication and language skills; and understanding and empathy with their communities and the world, Mr Teo told about 200 students at Universiti Teknologi Brunei.

In his speech, Mr Teo raised examples of both the potential and disruptive power of technology.

"Green technology has enabled us to seek cleaner and more sustainable sources of energy, to reduce our carbon footprint and the impact of greenhouse gas emissions," he said, pointing to Singapore's pursuit of clean and efficient energy.

But technology also poses new challenges and dilemmas, said Mr Teo. The spread of online falsehoods, the ethics of breakthroughs in medical technology, and the use of artificial intelligence in warfare were some of the issues he raised.

These opportunities and also the challenges are why universities need to move beyond just giving academic degrees to promoting lifelong learning, said Mr Teo.

"Instead, universities must evolve to become your students' partner in learning for life, to help them to continuously learn and relearn," he said.

"It will help all our citizens embrace and share the benefits of advances in technology throughout their lives, rather than fearing the disruptions that technology might bring." 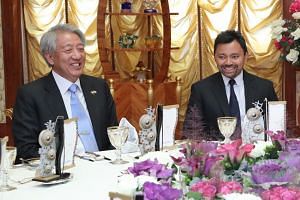 In his speech, Mr Teo noted the close cooperation between Brunei and Singapore in several areas, including trade, defence and regional unity.

Mr Teo was on the third day of his four-day official trip to the sultanate, where he also visited about 300 staff and students at Universiti Brunei Darussalam.

He is leading Singapore's delegation at the seventh iteration of the Young Leaders Programme, an annual exchange to build closer ties between leaders of both countries.

On Tuesday and Wednesday, Mr Teo and the delegation were hosted to briefings on Brunei's economic and financial developments, as well as agricultural and aquacultural site visits.

With him are Minister for Culture, Community and Youth Grace Fu and Minister for the Environment and Water Resources Masagos Zulkifli, among other office-holders.

The trip ends on Friday.