In April 2014, New Zealander Victoria McLeod fell to her death at a Clementi condominium where she lived with her parents.

The 17-year-old who was in her final year in an international school here had put great pressure on herself to get into university, even though her parents had told her that passing exams was not the only way to find her course in life.

Seven months after her death, her parents found her online journal. Here are several extracts:

I lost it. I just sort of keeled over and thought 'I can't do this'. Like, I've known that I will never have a dazzling life, what with the grades I get. But if I keep carrying on like this, I might actually end up snapping...

I don't know how I'm going to cope when I get back to school. Will it really help if I ask for it? Would I just be wasting my parents' money? But the whole point is that I can't ask for it anyway. How do you explain that you might have social anxiety... I just don't know. And it scares me.

Dear Friend; I was out yesterday and saw (). You know, one of those chicks that look like they have it all. Blonde. Lithe. Top grades. Popular. The whole jealously wrapped-up package... 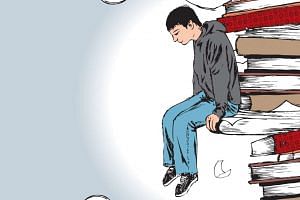 Exam stress among the young: When grades define worth

It's kind of beyond me how someone can have their life so sorted. Maybe I should start comparing them allegorically to filing cabinets. Each file section is a subdivision of life. Academics. Family ties. Extra-curricular activities. Social stature. Looks. Boyfriends/ girlfriends. Socioeconomic state. Mental health. Physical form. With a person like (), not only is every section perfectly organised, but also each page has the right border, font, page number and grammar with A-pluses on each sheet of crisp white paper inside every pastel folder... I gave up on trying to be an () a long ago.

I remember something J.K. Rowling wrote in the first Harry Potter book. That there were more important things than Hermione's affinity with books and cleverness. Like friendship. And bravery. But that's changing. One day, no one will know the meaning of courage or camaraderie.

Sadly, all that really matters, all that grown-ups are trying to drill into young minds, is success. If you are not successful, there is no point in existence. That's a pretty sad message to teach. But that is what's happening, whether we want it to or not.

It doesn't matter if it's at the cost of one's well-being. Even if you were reduced to something barely functioning, but you pulled yourself up and are sitting there, telling your story in an Armani suit, that's all that matters. That you became a success story.

A version of this article appeared in the print edition of The Sunday Times on October 30, 2016, with the headline 'Thoughts of a student on the need to excel'. Subscribe
Topics:
More
Whatsapp Linkedin FB Messenger Telegram Reddit WeChat Pinterest Print Purchase Article Copy permalink