For Mrs Anne Kingsley-Lee, getting her son to develop a love for the English language was no easy feat.

At eight years old, he would cry whenever he had to do any kind of writing, even if it was just constructing a sentence.

Mrs Kingsley-Lee recounted her struggle to a crowd of 230 people at the Central Public Library in Victoria Street as part of the askST @ NLB session on Friday.

The curriculum specialist at Rainbow Centre, a voluntary welfare organisation which operates three schools for children and youth with special needs, eventually developed a "bedtime ritual" for herself and her son.

This involved them keeping diaries and writing notes for each other about their day, which they would exchange.

Over time, sentences grew into paragraphs, and her son - now 14 years old - no longer detests the language.

I just wanted to show them the deliciousness of hearing words emanate and disturb the air around you.

MR WILLIAM GROSSE, master teacher of the English language at the English Language Institute of Singapore, on reading books aloud to his students.

Mr Grosse said that the key to motivating a child when it comes to teaching stems from a single word - love.

"When I teach a lesson, I must make them see why the lesson is so important to me that I want to teach it to them," he said.

Another concern highlighted by Ms Francisco during the talk was that students were not "reading with depth and breadth".

With the emergence of new media, the mother of three boys noticed that her sons often relied on listicles to obtain information, which hindered them from delving deeper into a topic.

This worry was shared by Mr Grosse, who replied that it was a matter of knowing how to traverse between online and print media.

When in school, he reads aloud a book to his students every day in the hope of encouraging them to get into the habit of reading. 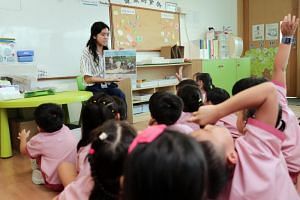 4 tips to teach a child to read

Are children who are gifted readers born or made?

Read With The Straits Times and win

"I just wanted to show them the deliciousness of hearing words emanate and disturb the air around you," said Mr Grosse.

"I found that they really got into it - they were borrowing books, reading the books and talking about (them), and going to the library to borrow the books I was reading aloud."

AskST @ NLB is a series of monthly discussions led by ST journalists, held in collaboration with the National Library Board. The talk was streamed live on the Rings.TV application, attracting more than 800 views.

The video can be replayed via the app, which can be downloaded from the Apple App Store or Google Play Store.

The next session on May 31 will be led by ST senior social affairs correspondent Theresa Tan and feature three panellists from ST's Generation Grit series.

They will share what the pain and adversity in their lives have taught them. Readers can register at str.sg/askTheresa