Like countless others before them, Primary 6 pupils went back to their schools yesterday to cross a milestone in their lives.

After the inevitably nerve-racking process of collecting their Primary School Leaving Examination (PSLE) results, some first-pumped the air while others congratulated each other. Several of them, and their parents, shed tears over the results slips - tears of joy as well as disappointment.

Schools celebrated not only their top scorers in the national exam yesterday, but also pupils who had shown great improvement, overcome odds in their lives, or exhibited exemplary values.

At Chua Chu Kang Primary, Gabriel Tay, one of the school's 246 pupils who sat this year's PSLE, was recognised for his unflagging determination. He was born with bilateral optic atrophy, an eye disorder which makes it difficult to view objects at close range even with the help of spectacles. 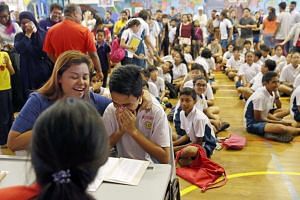 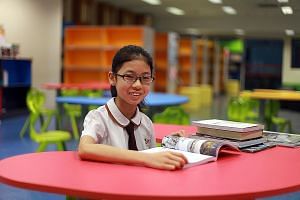 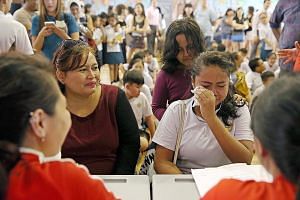 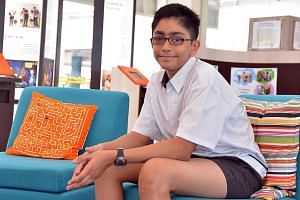 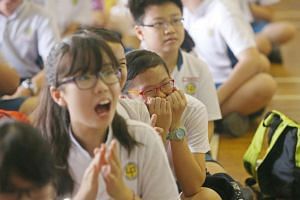 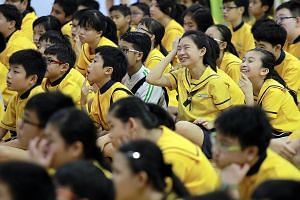 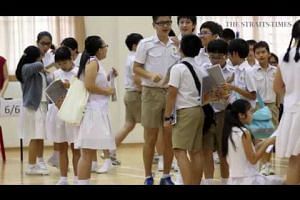 "During revision, I would have difficulty reading words or numbers if they were too small," said Gabriel, who also has trouble differentiating numbers that look similar, such as zero, six and eight. For him, reading long passages on worksheets is a tiring and laborious process.

My classmates are proud of the fact that I can handle all the tasks independently. I did not do anything special to prepare for the PSLE. I treated it like a regular school exam.

GABRIEL TAY, a Chua Chu Kang Primary pupil who has an eye disorder which makes it difficult to view objects at close range even with the use of spectacles.

But the 12-year-old pressed on, while his teachers accommodated his learning needs and made sure they spoke more slowly in class so he could take notes.

Gabriel feels no different from his peers. "My classmates are proud of the fact that I can handle all the tasks independently," he added.

"I did not do anything special to prepare for the PSLE. I treated it like a regular school exam."

His principal, Mrs Lee Wai Ling, said: "We celebrate the hard work put in by our students and teachers. They deserve a pat on the back."

She added: "PSLE is just the first milestone the children face, and it is not an indication of their future story."

At Lianhua Primary in Bukit Batok, which had 229 pupils sitting the exam, top scorers were mentioned as well as those who had overcome challenging circumstances and demonstrated strong character.

Vice-principal Tan Hui Ping said: "We can no longer (just) focus on academic excellence if we want to prepare our students to be future-ready. The workplace is going to be more unpredictable and complex, so having a good set of life skills is crucial. Being grounded in values is also important."

Ahmad Ibrahim Primary's principal Melinder Goh asked several pupils, including those who did well and those who had displayed exemplary values, to stand while their schoolmates applauded. Some 162 pupils from the school in Yishun sat this year's PSLE.

"We've always been motivating students and emphasising that grades aren't the be-all and end-all. What's important is them always doing their best," said Mrs Goh.

"Hence we recognise the students' efforts and affirm the progress they have made."