Its experience in adult education ties in with need to hone skills throughout lifetime: Minister

A significant piece of the higher education puzzle fell in place yesterday, when Singapore officially welcomed its sixth university - an institution very unlike the other five.

With its background in adult education and its partnerships with industry, the Singapore University of Social Sciences (SUSS) will be a champion of lifelong learning.

Setting out the backdrop under which SUSS was being brought under the ambit of his ministry, Mr Ong said the Government would stick by its pledge to raise the university participation rate of each age group to 40 per cent by 2020.

This would be a further rise from the current situation, when the Ministry of Education expects to admit about 15,900 Singaporean students into publicly funded universities in August , with a cohort participation rate of about 35 per cent.

But he stressed that the ability to keep pace with the economy's needs, and not just having a degree, is "what helps a person earn a living".

At a time when information can be Googled, he said, "skills are what carry a premium, and skills need to be honed throughout our lifetime".

This played directly to the strengths of SUSS, which Mr Ong said has been providing quality education to adult learners for years. Many of them had to juggle studies with other commitments. 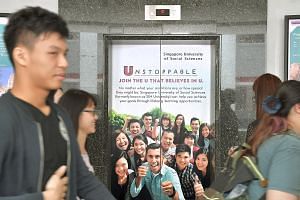 The university used technology to deliver its programmes to students. The change in its status could take it to another level.

SUSS will be able to expand its annual intake of full-time degree students from 580 to 1,000 in a few years, its president Cheong Hee Kiat told The Straits Times. It will also increase offerings for its 13,200 part-time students.

As a publicly funded university, SUSS will be able to tap more resources from the Government, which in turn will guide its strategic development to meet national objectives in education.

SUSS will also set itself apart through its strong social focus.

It will build a niche in fields such as early childhood education. All its full-time students will also have to execute a social project and champion a cause.

Unlike most other universities, SUSS will develop the applied degree pathway, said Mr Ong. It will also work with SkillsFuture Singapore Agency to develop courses to support industry.

This will complement the work of the Singapore Institute of Technology, which focuses on applied degrees in science and technology.

There will be strong inter-lacing of theoretical knowledge with real-life application, said Mr Ong.

Ten MPs spoke on the subject, with most welcoming the initiative.

Ms Denise Phua, an MP for Jalan Besar GRC who heads the Government Parliamentary Committee for Education, said that at a time when most tertiary institutions are playing catch-up in online and blended learning, SUSS is already way ahead in digital education and catering to a learner population in a fast-paced work setting.

"SUSS presents an exciting opportunity to paint and deliver the vision of what future learning for Singapore's working adults can be," she said.

SEE TOP OF THE NEWS, HOME:

Inflation set to pick up with rise in oil prices

Not practical to detail every task to be done by maids: Sam Tan

Fatalities down in work-linked traffic accidents

One in five F&B outlets using tech to raise productivity

80% of firms given help to venture overseas are SMEs