Singapore students may be topping the charts in mathematics, science and reading, but it is exacting a heavy emotional price on them.

An international study suggests that Singapore students, known worldwide for academic excellence, also experience high levels of anxiety and have been exposed to bullying.

The findings emerged in a study by the Organisation for Economic Cooperation and Development (OECD), which conducts the triennial tests called the Programme for International Student Assessment (Pisa). The study polled 540,000 students from 72 countries and economies to look at the connection between well-being and achievement in the Pisa tests.

One question that the 5,825 Singapore students who were polled did not have to answer was on how satisfied they were with life, but their responses to the other questions revealed that most were anxious about tests and grades.

Students were asked to respond to statements such as: "I often worry that it will be difficult for me to take a test"; "I worry I will get poor grades at school"; "I feel very anxious even if I am well prepared for a test"; "I get very tense when I study for a test"; and "I get nervous when I do not know how to solve a task at school".

It emerged that their anxiety levels were significantly higher than the OECD average for all five questions. For example, 66 per cent of students across all OECD countries said they were worried about poor grades at school, but among Singapore students, it was 86 per cent.

In Singapore, 76 per cent reported feeling very anxious for a test even if they were well prepared, compared with the OECD average of 55 per cent.

This could be related to the fact that Singapore students were also more driven. One question asked if they wanted to be top of their class. Some 82 per cent said they did. The OECD average was 60 per cent.

The study found that students who reported they wanted to do well in school performed better. On average, the most motivated students scored the equivalent of more than one school year higher in Pisa than the least motivated ones. 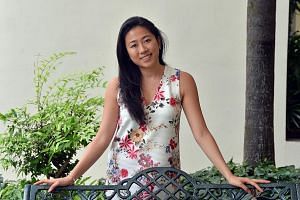 When asked to comment on the finding on test anxiety, the Ministry of Education (MOE) said the 15-year-olds in Singapore who were surveyed comprised largely of Secondary 4 students preparing for their N- and O-level examinations.

"Hence... it is understandable that our students are likely to be more anxious about doing well," it said, noting that in the same survey, more than eight in 10 of Singapore's 15-year-olds also said they enjoyed learning science.

"So, we recognise that while our students are anxious about doing well in examinations, their enjoyment in learning science has not been dampened," it said.

Regarding the correlation between motivation and stress, it acknowledged both sides of the coin. "Research has shown that stress at appropriate levels can be a motivating force to energise us for the challenges we face. That said, we recognise that while there is no certainty of causality, having overly high achievement motivation is also correlated with anxiety levels," it said.

"Hence, while we are encouraged that our students are highly motivated to learn and achieve, we are cognisant that this must not come at the expense of their well-being," said the ministry, adding that schools put in much effort to help students understand the meaning of their learning, instead of focusing solely on their achievements.

"Ultimately, stress and anxiety is a personal response arising from one's expectations and the ability to manage challenges. In the light of this, our schools focus on helping students gain a wider perspective, looking beyond achievement, by helping them manage their expectations and understand their strengths and weaknesses. This will also help our students develop more resilient and positive mindsets."

National Institute of Education don Jason Tan said the finding on high anxiety levels is not out of step with a school system that uses exams to channel students into different secondary and post-secondary pathways. "To get ahead, a student has to not only do well, but well above his peers. So it is not surprising that our students are anxious about exams and grades," he said, noting that in recent years, the MOE has introduced various measures to lessen stress and anxiety.

"The changes to the Primary School Leaving Examination scoring system and aptitude-based admission into post-secondary institutions are among the measures that will hopefully lessen anxiety and increase the enjoyment of learning among our students."