Mr Lee Tat Wei lives in a four-room flat in Woodlands. He and his older brother went to neighbourhood schools. His father is a taxi driver and his mother works as a part- time sales assistant.

Despite his humble background, the 19-year-old said he has never felt shortchanged. "My parents gave me an environment that money couldn't buy. They never pressured me to get straight As. They taught me to live in the moment," said the Anglo-Chinese School (Independent) graduate who had a perfect score of 45 for his International Baccalaureate diploma exams.

Mr Lee, who is one of the five recipients of the President's Scholarship this year, will be going to read liberal arts at Yale University.

He attended Woodlands Primary School for three years before transferring to ACS (Primary) after qualifying for the Gifted Education Programme.

"I grew up in two different worlds... I come from a working-class family, but in school I interacted with peers from different backgrounds... Some came from more affluent families," he said.

Mr Lee, a Public Service Commission (PSC) Scholarship (Foreign Service) holder, said: "I empathise with people on the ground, but I also understand people who look at things intellectually and theoretically." 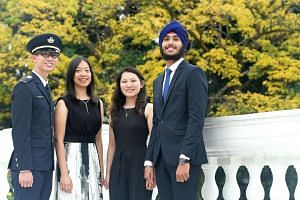 A love for languages, cultures

Blazing a trail for Sota

The President's Scholarship is the most prestigious of all undergraduate awards given out by the PSC.

My parents gave me an environment that money couldn't buy. They never pressured me to get straight As. They taught me to live in the moment.

MR LEE TAT WEI, on his parents. His father is a taxi driver and his mother, a part- time sales assistant.

The other recipients this year are: Ms Cheri Wee Jin Ting from the School of the Arts, Singapore; Raffles Institution graduates Jasdeep Singh Hundal and Agatha Sacha Lim Lee; and officer cadet Lionel Oh Wei Hao from National Junior College. They are all aged 19.

They were picked by the PSC for their character, leadership potential and outstanding co-curricular and academic achievements. President's Scholarships have been awarded since 1966.

At the award ceremony yesterday, President Tony Tan Keng Yam told the new batch of President's Scholars that they can expect to tackle challenges such as safeguarding social cohesion and the need to improve skills in the workforce.

"Our global environment is constantly changing. As a small nation, Singapore has to constantly find our place in a world that does not owe us a living," said Dr Tan.

Singapore needs to "strive for continuous progress in order to earn our place on the global stage", he added.

Mr Lee said his parents are his greatest role models.

"They weren't very educated but they gave me moral support... My father encouraged me to take up a sport, to do what I love," he said.

In secondary school, he joined rugby, which he said taught him not just physical discipline but also the ability to confront failure and focus more on the learning process.