Singapore ranks among the top in the world when it comes to upward mobility in education, with nearly six in 10 adults attaining higher qualifications than their parents.

According to a report by the Organisation for Economic Cooperation and Development (OECD) released yesterday, across all age groups, those with more qualified parents are likely to end up better educated than their peers. But the gap in Singapore has shrunk considerably over the years.

The OECD report also pointed out how disadvantaged students here whose parents are less educated do well compared with their peers around the world. About half of 15-year-olds from Singapore from the bottom quarter here scored among the top quarter of students globally.

Many of them also have core skills in science, reading and mathematics, according to Programme for International Student Assessment results.

However, the study also showed that only one in 10 in this group is able to keep up with the best of his local peers in the top quarter of performance.

Many disadvantaged students in Singapore also tended to be clustered in the same schools. 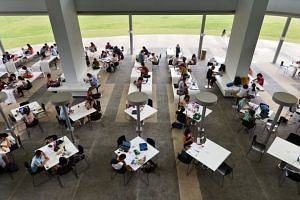 In its report on equity in education, OECD highlighted how disadvantaged students around the world face a variety of barriers to learning, from a lack of resources such as books and games, to access to early education.

But Singapore stood out because of "the enormous strides made by adults with low-educated parents", it said. "Even disadvantaged adults in the two youngest cohorts were more likely than not to complete tertiary education - among those with low-educated parents, the probability of completing tertiary education was 51 per cent for adults aged 36 to 45, and 58 per cent for adults aged 26 to 35."

The Ministry of Education (MOE) said yesterday that it is heartened to see that education mobility across generations has improved over the years, as it opened up pathways to technical and vocational education, and ensured that every school and institution is well-resourced.

It also said that students from less affluent families here fare well compared with their peers in other countries and in absolute terms.

But it acknowledged the report showed that more work needs to be done to ensure good social diversity and mixing in schools.

The ministry emphasised that all schools are well-resourced and much has been invested in providing high-quality education to disadvantaged students.

For example, it has set up specialised schools for Normal (Technical) students or those who do not pass the Primary School Leaving Examination.

MOE also said that efforts to level up students who need more support through literacy and numeracy programmes have also paid off, as students from socio-economically poorer homes have done very well by international standards.

It noted that going forward, it is more important for people to develop skills instead of pursuing academic qualifications alone.

The OECD study had found that with more tertiary-educated adults, the proportion of Singaporeans outdoing their parents has started to fall. Fewer of those aged 26 to 35 attained a higher level of education than their parents, compared with those in the 36 to 45 group.

The OECD findings are based on data from 72 countries and economies which took part in previous Pisa tests, and a survey of adult skills.