After more than half a century, the Singapore School for the Deaf will close this year for a welcome reason - dwindling enrolment.

Enrolment has fallen in the past decade as fewer children now suffer serious hearing loss, thanks to medical advances in screening and assistive devices.

The school, run by the Singapore Association for the Deaf (SADeaf) now has just two 15-year-old students, who will transfer to Lighthouse School, a special education school for children who are visually or hearing impaired.

Ms Irene Yee, SADeaf's president, said there would always be a smaller group of children for whom technology such as cochlear implants will not be viable or who may not attain proficiency in oral language. She said sign language would benefit them.

SADeaf is looking to convert its Mountbatten premises to a training hub for specialised teachers in Singapore Sign Language. It will continue to contribute to the education of children with hearing loss by working with the Ministry of Education and providing specialised teachers and educational interpreters.

Many deaf students are on a par with their mainstream peers in cognitive and academic abilities.

MS BARBARA D' COTTA, vice-principal of the Singapore School for the Deaf.

Ms Yee said: "We hope to support these schools in building their capacity to be more inclusive of students with hearing loss, for example, by giving talks or providing sign language lessons to mainstream teachers or students."

Ms Barbara D' Cotta joined the the Singapore School for the Deaf in 1979 as an assistant in classes and later became a form teacher, learning sign language on the job.

Now the school's vice-principal, Ms D'Cotta, 58, will join Mayflower Primary as one of the two specialised teachers. 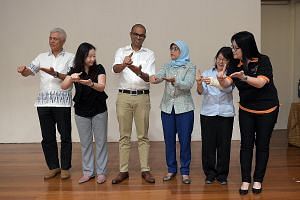 She said: "Many deaf students are on a par with their mainstream peers in cognitive and academic abilities. They can do even better in a bigger school, where there is more exposure and competition that can challenge them."

Mr Roland Goh, 46, an Uber driver, said his 11-year-old daughter who has moderate hearing loss, is "doing fine" in a mainstream primary school. "Her friends might tease her sometimes about her hearing aids, but I tell her to focus on her studies."

Mr Goh attended the Singapore School for the Deaf in the 1980s and remembers those days fondly - from playing catching to his "strict and good" teacher. He said: "We had a shared language and we could identify with one another."

A version of this article appeared in the print edition of The Sunday Times on September 17, 2017, with the headline 'Singapore School for the Deaf to close due to dwindling enrolment'. Subscribe
Topics:
More
Whatsapp Linkedin FB Messenger Telegram Reddit WeChat Pinterest Print Purchase Article Copy permalink