The school's name, Nanyang, refers to the lands south of China, which were in the Chinese sphere of influence for centuries.

And the members of Nanyang Junior College's (NYJC) school management committee were all Chinese.

But the Serangoon school's Chinese roots did not deter Ms Nur Fazlina Arzami, now a 22-year-old sociology undergraduate at the National University of Singapore, from choosing to go there after she left Tanjong Katong Girls' School (TKGS) in 2011.

"After the O levels, my friends and I visited many open houses. When I went to NYJC, it had a very vibrant environment... There were even performances by Malay dancers, and I didn't feel any 'Chinese-ness' when I went there."

She ended up listing the school as one of her top choices as she wanted to get out of her comfort zone.

There's a lot of benefit to be gained from interacting with people who are different from you. The world is more globalised now, and you may have to go overseas and adapt to situations...

MS NUR FAZLINA ARZAMI, on how SAP school students should get an earlier opportunity to mix with those of other races. 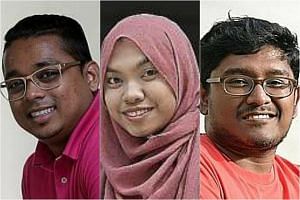 Minority report: Students of other races in schools with a strong Chinese tradition

She said: "From the school name and the location alone, I knew that there would not be as many Malays in the school compared with TKGS. But instead of going to another JC where there would be many of my former schoolmates, I wanted to try making new friends."

During Ms Fazlina's time at NYJC, many schoolmates told her that she was their first Malay friend.

One reason for this, she later found out, was that many of them were from Special Assistance Plan (SAP) schools, including Chung Cheng High School (Main), which is affiliated to NYJC.

There were fewer than 30 non-Chinese students in her cohort. But Ms Fazlina said that friendships developed naturally during interaction in class and co-curricular activities.

She saw this as a chance for both sides to learn more about each other's cultures.

"My non-Muslim friends have become familiar with my routines, such as me praying regularly in the day. When we go out, I will have to take a break and they just wait for me - it's become very comfortable.

"Sometimes, they call me a 'closet Chinese', which is a bit problematic because it shows that we still have stereotypical views of what constitutes a Malay or a Chinese."

NYJC, which was under principal Kwek Hiok Chuang for more than a decade until he retired last year, had a very "open and welcoming" environment, recalled Ms Fazlina.

But while the number of non-Chinese students has increased - ranging between 50 and 100 in the JC2 cohort of about 700 students - she thinks that it would be helpful if students from SAP schools had an earlier opportunity to mix with those of other races, instead of waiting till JC.

She said: "(Given how) I'm the first Malay friend for many students, perhaps SAP schools should be open to applicants of other races, providing Malay or Tamil language classes even as they keep their Chinese heritage.

"There's a lot of benefit to be gained from interacting with people who are different from you.

"The world is more globalised now, and you may have to go overseas and adapt to situations...

"It will help develop you into someone who can talk to various people from different backgrounds."

A version of this article appeared in the print edition of The Straits Times on February 20, 2017, with the headline 'She was some schoolmates' first Malay friend'. Subscribe
Topics:
More
Whatsapp Linkedin FB Messenger Telegram Reddit WeChat Pinterest Print Purchase Article Copy permalink