Three universities here - Singapore Management University, National University of Singapore and Nanyang Technological University - are holding their commencement ceremonies this month. The Straits Times spoke to three graduates who have excelled in university, despite struggling academically in their earlier years.

Mr Ng Boon Thai came from a broken family, did not do well in primary school, and smoked and drank in lower secondary.

But fast forward to today and he is graduating with a double degree - achieved with top honours - from Singapore Management University (SMU).

Mr Ng, now 28 and a research engineer, had done badly at the Primary School Leaving Examination with a score of 166.

He was only two when his parents divorced and nine when his mother remarried.

"In lower secondary, I was in bad company, drinking and smoking," said the former Normal (Academic) student from Serangoon Garden Secondary School.

"But in Sec 3, I developed an interest in accounting and also found a new group of friends and that changed the way I lived."

That kind of life made me independent from a young age. I value the things I get because I have to work for them. I've learnt that hard work always pays off.

MR NG BOON THAI, on his difficult past. 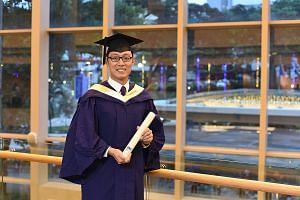 Slow start, but going back to school pays off

"My English was bad and at that point, nobody cared. My mother wasn't around much either.

"But Ms Sim kept encouraging me. She made me stay back after class and lectured me until the security guard chased us home.

"She did not just talk to me about English, but about life."

Mr Ng's grades improved and he studied at Ngee Ann Polytechnic before enrolling in SMU, where he studied information systems and business management.

But things took a plunge when his mother went through a second divorce in 2012 and her salary could not pay for a flat for the family to live in.

Said Mr Ng: "My family was broken apart and we had to stay separately with relatives. Luckily, a friend in SMU later rented a flat to us at a cheap rate and at least I got to keep my family together."

Mr Ng does not feel bitter about what he went through. "That kind of life made me independent from a young age," he said.

"I value the things I get because I have to work for them. I've learnt that hard work always pays off."

Mr Ng has also become much closer to his mother. "As I grew older, I realise how much pain and suffering she went through.

"People think that my childhood was unfortunate, but I think that I've grown so much through my experiences and it's helped me develop.

"I really am very fortunate."