SINGAPORE - It is "understandable" that questions have been raised about the recent presidential election, said Deputy Prime Minister Tharman Shanmugaratnam, who, on Wednesday night (Sept 20), offered a positive take on the concerns flagged.

"It is encouraging that people feel about this, and they want race to matter less in the future," he said at a dialogue at the Nanyang Technological University (NTU).

"It is encouraging because it shows that we value what we say in our pledge."

Mr Tharman was responding to a question on whether the reserved election had entrenched even more deeply the idea of race, and whether it in fact marked a regression in race relations.

The DPM, who said he himself would have also preferred a contest "like most people", said, however, that the aspiration for race not to count is something that requires working towards.

"It cannot just be a pledge, it cannot be just an incantation," he said. "Sometimes it requires a conscious act of the state." 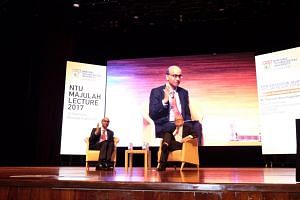 Biggest mistake is to think 'if it ain't broke, don't fix it': DPM Tharman on Singapore's education

"The reality of the matter is, not just in Singapore but anywhere else, including the most mature democracies that everything else (about a candidate) being equal, race, ethnicity, religion, matters."

He cited an editorial by Malaysian publication Mingguan Malaysia, on how it was unimaginable that Singapore had a Malay president when 75 per cent of its population was Chinese.

"An insightful piece, because they are not great fans of Singapore. But they decided to write an editorial commending what happened... But we are not a special people. We have to work to be different and continue on this journey."

Mr Tharman was speaking at NTU's inaugural Majulah Lecture, a new initiative by the university that aims to tackle topics relevant to the development of Singapore.

He laid out five key shifts Singapore's education system needs to make in a changing world. These include ensuring every child has a fair chance of success, reducing academic load and broadening education. There must also be more flexibility in differentiating students, developing individuals' potential throughout life and deepening multiculturalism from a young age, he added.

On the last point, Mr Tharman elaborated: "Never forget that growing up as a minority is different from growing up in the majority. Never pretend it is the same.

"It requires extra action, extra empathy, and that sense of sharing the same boat together," he added, using the Chinese idiom feng yu tong zhou.

This multicultural quality of the Singapore identity is something that has to be shaped and experienced from a young age, especially in the context of a world occupied by strife, said Mr Tharman.

"It has to start from (a young age). The beautiful thing about kids is that they love play, they love dance, and they love sports. We can shape these instincts if we are conscious about mixing them early in life."

He flagged an observation about school co-curricular activities (CCAs). "I think our CCAs are too ethnically defined in practice, in ways that sometimes puzzle. Football today is different from what it was in the 70s and 80s, you look at our national team. All very good players. But it used to be a much more multiracial team in those days."

Towards the end of a nearly hour-long speech, he teared while speaking of how he has noticed Indian or Chinese girls performing in Malay dances in school.

"That's when you get 'getaran jiwa', the stirring of the heart," he said, using a Malay phrase. "The parents notice it, their children know it, and slowly they realise we are a lot more the same than we thought."

Education has shaped Singapore and is the most important of its strategies in the last 50 years, and will continue to be in the decade to come, he said, adding that it has helped avoid deep gulfs within society and improved social mobility.

"The biggest mistake is to think that "if it ain't broke, don't fix it", he said, emphasising the need for schools and institutions to evolve. "Because in education, more than in any other fields, we will only know how well we are doing 20 or 30 years from now."