In the second of a four part-series, OECD's education and skills director Andreas Schleicher talks about why we need to study and whether universities really add value

A widely quoted 2011 study by researchers Richard Arum of New York University and Josipa Roksa of the University of Virginia, showed that a large proportion of students showed no significant improvement in skills during their first two years of college.

A follow-up study a few years later tracked the same cohort of undergraduates as they finished college and entered the working world. The results again were not encouraging.

Studies on adult skills conducted by the Organisation for Economic Cooperation and Development (OECD) also show that high school graduates in some countries have finer literacy and numeracy skills than college graduates in other countries.

These studies prove that there is a real need to examine if and how universities add skills and value to their students, says Mr Andreas Schleicher, who heads the education and skills directorate in the OECD. "Let's face it, at the moment, degrees are used as a proxy for skills and, as many surveys suggest, they are a poor proxy for skills," says the German known for not mincing his words.

He points out that even if a student acquires skills and knowledge, these can quickly become obsolete in this fast-changing word.

"Degrees signal what you did in the past. They don't necessarily show what you can do today," he says, using his own university education as an example.

"I studied physics but if you put me in a lab now, I won't be able to do a great job," he says. I believe the future is not with degrees, but with microcredentials - a certification indicating competency in a specific skill. Learning will be done in many different places and many different ways, both online and offline. Increasingly, employers will not just be looking at degrees, but at certifications, badges and various other forms of skills assessment. It's already happening in some fields, such as computing, with tech companies. And in a world faced with constant change, frontloaded learning - the current model of studying four years for a degree and then going out to build a career will not work any more. We have to keep learning, while earning. You have to keep going back to re-learn and re-skill, as you have to adapt constantly.

MR ANDREAS SCHLEICHER, on whether he thinks the future of learning lies with university degrees.

He says the OECD, in partnership with a handful of European universities, is currently undertaking another study to measure if universities do indeed add skills and knowledge to their students over the course of their degree studies.

The assessment will take into account the set of skills with which students started their university studies and then try to measure the gains they made over the course of their degree programme.

So for those going from the A levels to university, their A-level scores are used as a proxy for the skills they have acquired till that point. These will be compared to the results of the OECD test given to undergraduates at the start of their final year, measuring their generic skills, such as critical thinking skills and writing skills. This will show how university study honed and expanded their skills.

"It is important that we do not reward selectivity... but look at the real value that is added," he stresses, but admits that there was much unhappiness when the idea of the test - called Ahelo, Assessment of Higher Education Learning Outcomes - was mooted a few years ago . The OECD did an earlier feasibility study in 2012 to assess the skills of economics and engineering students in 17 countries at the end of their degree courses.

They were tested on skills such as reasoning and problem-solving, as well as skills related to their disciplines.

The study raised a storm of protests from university administrators, with many raising questions on whether a common benchmark would accurately compare systems across countries.

But Mr Schleicher notes that since operational problems can be worked out, the opposition to the test was more political.

Simply put, the big guns do not like the test while countries with low-profile universities are "often more interested in a new kind of measurement because for them, it's an opportunity".

It is a different story with institutions built on past reputation. "It's difficult to get buy-in from elite institutions that have a lot to lose."

Still, he seems unfazed by the controversy. "OECD has been through the same thing with Pisa," he says, referring to the Programme for International Student Assessment that benchmarks school systems around the world.

"In the beginning, everybody said: 'Not me.' Now they are all part of it."

Over 70 countries participate in the survey conducted every three years to assess the skills of 15-year-olds around the world . 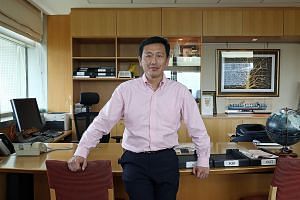 'If you work like a robot, you will be replaced by a robot': Ong Ye Kung

He stresses that when OECD develops a test that is sound, it is "going to reveal the truth about quality in higher education".

Asked why OECD was pressing on with it despite the reluctance of institutions, he says higher education needs to do more to prove its worth. At present, although it is clear that individuals benefit from a college education in terms of job prospects, it is not clear whether this is because their degree certificate signals to employers that they were clever enough to go to university or because their studies added to their knowledge and skills.

He sums up the situation that raises the need to measure exactly what a university education gives you. Systems of higher education are expanding rapidly as more young people chase degrees which, they believe, will lead to more highly paid jobs.

This trend gathered speed in the mid-1990s. By 2025, the number of higher education students is forecast to reach 263 million.

"A degree is becoming the new minimum," he says, noting that the number of higher education institutions is also increasing and the sector is becoming more diverse.

Yet even with this expanded access, many individuals and societies remain under-served.

He also points to the skills mismatch that has led to graduates in many countries ending up unemployed or underemployed.

He notes that many governments, including Singapore's policymakers, are becoming increasingly concerned about how to facilitate and maintain high quality higher education that is relevant to the social and economic needs of their economies.

Because of the increasing investments in higher education - whether by taxpayers or by students and their families - there is also a need to ensure that universities provide value for money.

Right now, the issue has been muddied by the proliferation of global university ranking provided by, among others, the Shanghai Jiaotong, Times Higher Education Magazine and London-based education consultancy Quacquarelli Symonds (QS). But Mr Schleicher notes that some of the most important aspects of a university education, such as teaching quality, are assessed using proxy measures such as the number of staff with PhDs and the ratio of academic staff to students.

"The Shanghai ranking takes into account Nobel prize winners as far back as 100 years ago... what does it tell you about the quality of teaching today?"

Since governments and tax payers invest heavily in universities, the hope is that they will develop high-level skills among the population to cope with a knowledge-based economy.

It is critical to validate this with good, objective data and a rigorous benchmarking test. The true worth of a degree education is precisely what Mr Schleicher is trying to measure.

A version of this article appeared in the print edition of The Straits Times on March 05, 2018, with the headline 'Putting universities to the test '. Subscribe
Topics:
More
Whatsapp Linkedin FB Messenger Telegram Reddit WeChat Pinterest Print Purchase Article Copy permalink